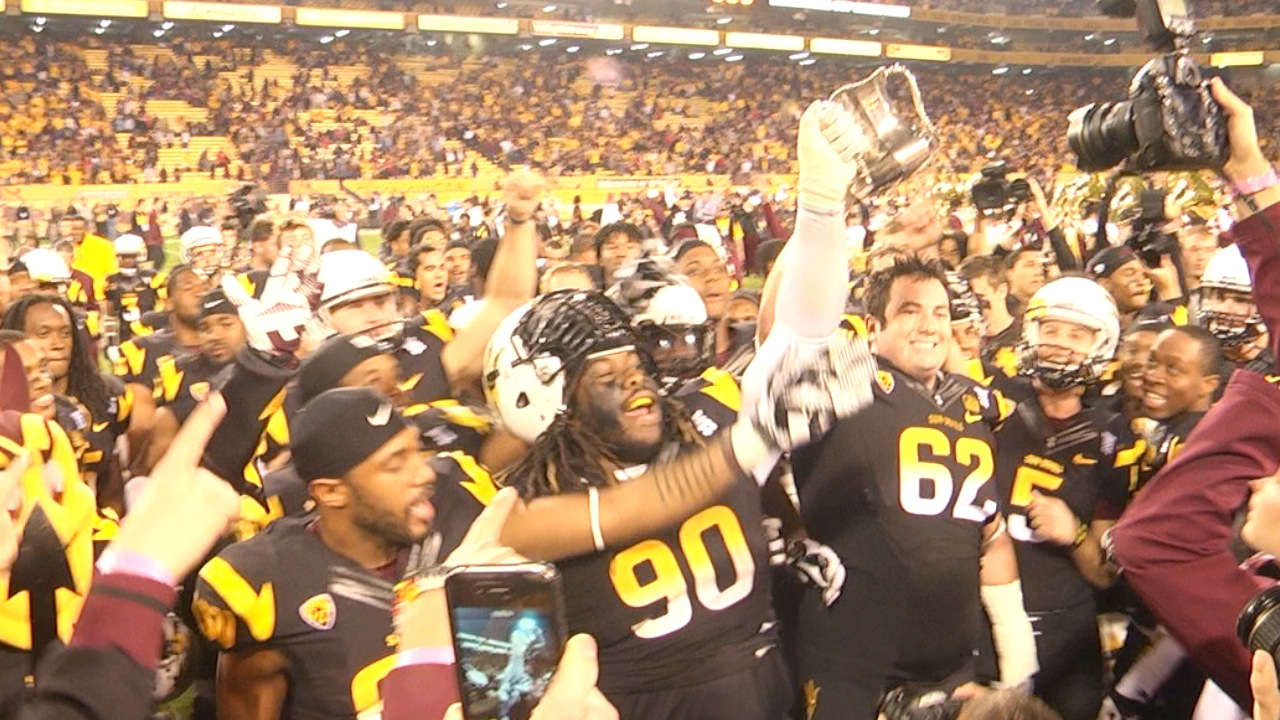 Arizona State is now 2-0 in Territorial Cup games against the Arizona Wildcats under head coach Todd Graham. The Sun Devils came out fast early and never looked back in their 58-21 win. Here are five things we learned from this chapter of the Territorial Cup.

1. Go DJ, that’s my D.J.: Marion Grice sidelined for the first time in 2013 so in steps the local star D.J. Foster to fill in as the premiere back for the Sun Devils. Because of him and also solid play from Mr. Versatility, De’Marieya Nelson, the ASU ground attack didn’t skip a beat. Foster made a lot of big plays, especially in the first half which aided ASU to a 30-7 halftime lead and displayed a lot of physicality as well. This performance showed that Foster is ready to be THE guy for the Sun Devils out of the backfield and shouldn’t miss the great production of Marion Grice when he graduates after this season. Oh by the way, Foster was named the MVP of the game.

2. Ka’Deem Carey(s) the load again: The ASU defensive front was outstanding in the game Saturday and for most of the first half did keep Ka’Deem Carey somewhat in check. But that didn’t stop the Doak Walker Award finalist from getting over the century mark in rushing yet again with 157 rushing yards on 32 carries and a touchdown. Carey has shown all season, and again on Saturday, that it doesn’t matter who he is going up against. He is dynamic enough that he will get over that century mark and with the at times lack of holes that he had to work with, he is one of the best ever to put on a Wildcat uniform.

3. Pick 6 Sun Devils: A huge play in the game in the third quarter as the Wildcats were looking to make their comeback was a 60 yard interception returned for a touchdown for Damarious Randall. It made him the fifth Sun Devil defensive player to have a pick six this season. He joined Alden Darby (vs. USC), Osahon Irabor (vs. Notre Dame), Robert Nelson (vs. Oregon State) and Carl Bradford (vs. UCLA). The five in 2013 tied the five in 1974 which is the most pick sixes in a season in school history.

4. ‘Cat traps: What set the tone for Arizona last week against Oregon was how they were able to get out to an early lead and maintain it. But we from what we saw first vs. UCLA, then Washington State and now at ASU, the Wildcats have not responded well to falling behind early. Arizona did do a good job getting themselves back into the game in the 3rd quarter but falling into a 27-0 hole on the road is way to much to ask. The key for whomever the Wildcats face in their bowl game will be to come out fast.

5. ASU will host the PAC-12 Championship game: You knew that was on the line coming in, but now it is official. It will be a 5:45 kick-off from Tempe on Saturday, December 7th against the Stanford Cardinal.