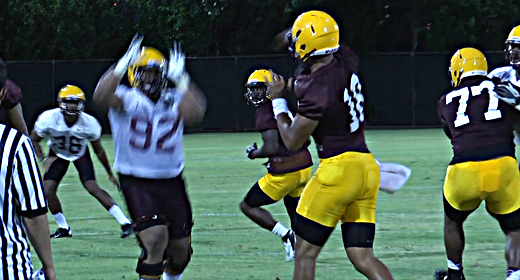 I was doing a show a couple of years ago when Arizona State linebacker Brandon Magee and his million dollar smile walked into the studio with a gangly built kid trailing him. Magee was there to build up the Sun Devil program and also show the way to freshman quarterback Michael Eubank. That was my first interaction with the young man who was billed as “the next great one” by recruiting services. It never happened. His short lived career at ASU will be remembered for the missed goal line plays at Missouri and in the Pac-12 title game against Stanford. Head coach Todd Graham announced after practice on Friday that Eubank is leaving the program. No one should be surprised by this bit of news.

I know that Mike Bercovici is behind Taylor Kelly for now (some believe he is a transfer possibility too), but 2014 Sun Devil quarterback commit Manny Wilkins (Novato, Calif) may not ever see a redshirt in his ASU locker.

De’Chavon Hayes. The number one-ranked junior college running back in the nation committed to ASU this morning. Hayes is 5’11, 190 pounds out of Scranton (Penn.) Lackawanna Community College. He chose the Sun Devils over Oklahoma, USC, and Virginia among others. His nickname is “Gump” (“run Forest run’).