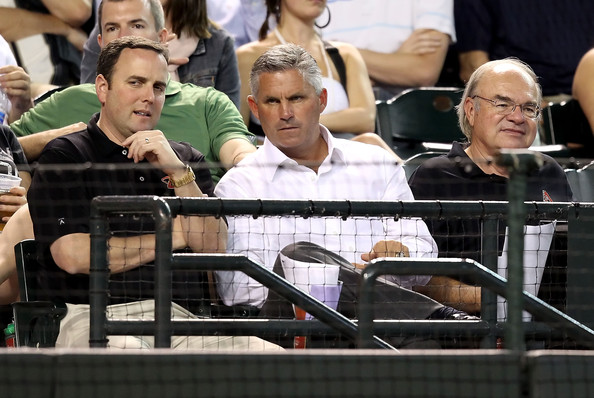 If at first you don’t succeed, try and try again.

Truer words have never been spoken for the Arizona Diamondbacks who have gone back to the drawing board this winter looking to piece together the right blend of talent on the field and chemistry off it.

A promising start to the 2013 season quickly spiraled out of control and the summer months wore on with a crescendo featuring the rival Los Angeles celebrating their National League West title in the Chase Field pool.

There are whispers outside the organization who say the Diamondbacks have an identity crisis. Close to a year ago general manager Kevin Towers shipped Justin Upton to Atlanta for versatile Martin Prado. The organizational goal was to strikeout less, play better defense and win close, low-scoring games. Earlier this month Arizona shipped young lefty Tyler Skaggs and outfielder Adam Eaton for slugger Mark Trumbo.

President and CEO Derrick Hall says there’s a method to their madness.

“We’re not the type of team that’s going to go out and make a huge free-agent signing,” Hall told Sports360AZ.com in a recent phone interview. “We just can’t do that. We can’t compete [financially] with the LA’s of the world but we can get creative through trade…there are going to be critics who say boy, how can you get rid of your depth and move such good prospects? [It’s] because we have a surplus, fortunately.”

With a power bat and possible closer in Addison Reed, who was brought over from the White Sox days after the Trumbo deal, Hall and the Dbacks have their sites set on Japan’s coveted free agent ace, Masahiro Tanaka.

“This is somebody we’ve scouted for the last couple years intensely for good reason,” Hall explained. “This is someone who can get in a rotation like ours and can be a number one for us…that’s just how good he is.”

The bidding started Thursday night. Clubs have until January 24 to sign the 25-year-old right-hander who went 24-0 with a 1.27 ERA pitching for the Rakuten Eagles.

Hall says the organization has and will continue to build their overseas relationships in Japan and elsewhere.

“We have scouts on the ground all the time.”