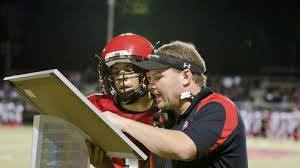 After 15 years of coaching high school football in Arizona, 14 of which as the head coach at Paradise Valley high school, Donnie Yantis is starting the newest chapter of his life.

Arizona Christian University announced the start of their first ever football program and have named Yantis their first head coach.

The Firestorm will begin at the NAIA level and are slated to play their first football game on August 23rd, 2014. But a lot has to happen before then.

“There is just so much to do,” said Yantis. “It’s 18 to 20 hour days, it’s going to bed late and waking up early. I get most of my work done late when everyone else is asleep because my phone isn’t ringing and my emails aren’t coming.”

For Yantis, it all starts with recruiting.

“I have contacted every high school coach in Arizona via email and my next goal is to contact them by phone,” Yantis explained. “And get their recruiting lists of their potential student athletes that we want to recruit to Arizona Christian. And then contacting the student athletes.”

With national signing day for football weeks away, Yantis has a game plan and will hit the ground running to begin his quest at the helm of the Firestorm.

“I have no doubt that the talent in Arizona is going to win Arizona Christian a football championship,” Yantis stated. “We are going to focus our recruiting in Arizona and 90-95% of our players will be Arizona kids. There are many schools around the country that are below division I that are coming in here and snagging all that talent and taking them out of state. We want to make this an Arizona institution and develop our program from the ground-up with Arizona kids.”

He further mentioned that they plan to sign 15 to 20 junior college athletes from Arizona on top of a goal of signing 50 high school athletes all by signing day.

Yantis has seen first hand the talent that has come out of Arizona and how much it has improved since he first started coaching in the valley.

“Arizona has grown so much in the past 15 years,” he mentioned. “The competition has grown and also the coaching has improved. There are great coaches in this state…and we want to recruit their athletes. They are going to know that if they come to Arizona Christian, they are going to be taken care of by me, our staff and the whole University.”

Yantis explains that his mission to build Arizona’s newest collegiate football program is going to be faith, family, education and football. The coming weeks, while very busy, expect to be very exciting.