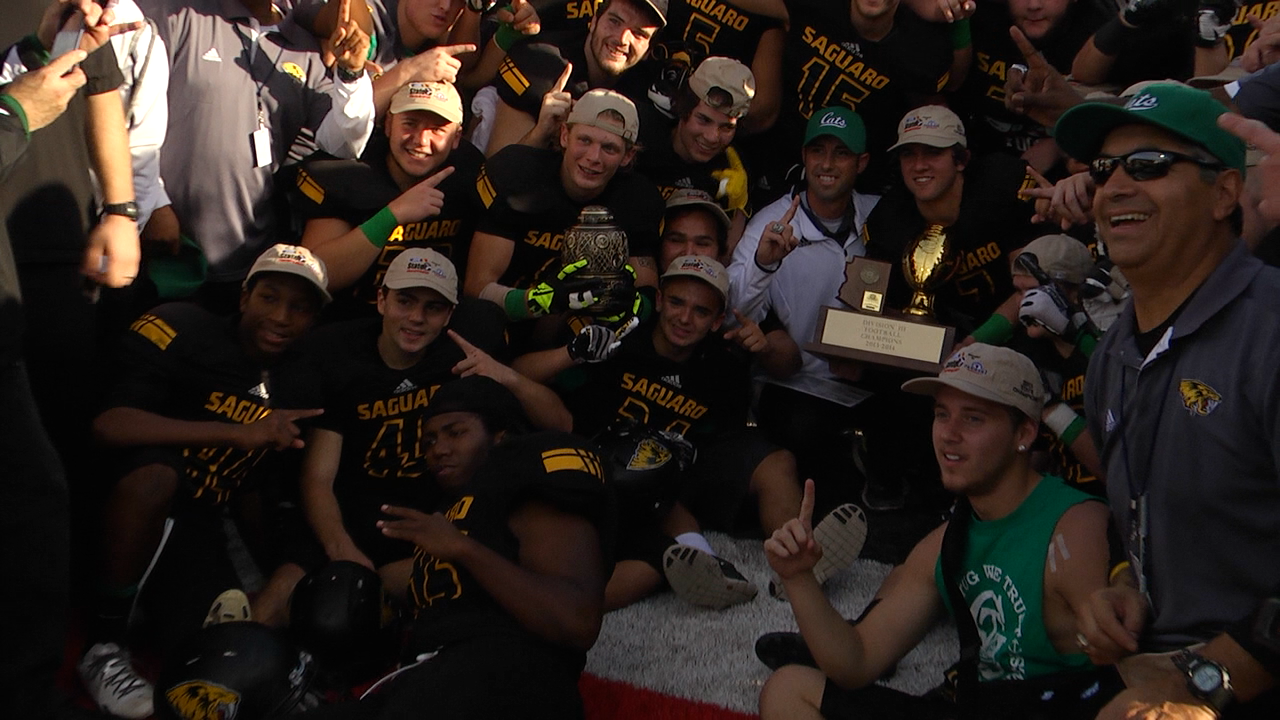 It was classic dog and cat fight for the division III state title between the defending champion Queen Creek Bulldogs and the Saguaro Sabercats. Coming off a 77 point performance in the semifinals against Desert Edge, the Cats continued their offensive explosion and after a one year hiatus, are state champions once again in Arizona.

“It’s so exciting,” said Saguaro’s Christian Kirk. “I worked all season to get these seniors a championship…I’ve grown with them my whole life. To get them this is a great feeling…it’s the best feeling in the world. I can’t even describe it.”

“It was awesome,” added Saguaro quarterback Luke Rubenzer. “They were like my brothers. Everybody on this team means something special to me and I’m glad we could go out on top…it’s been a great ride.”

Rubenzer had been on fire coming into the game with 17 total touchdowns (throwing and rushing) in his last two playoff games.

To start the game, it was a heavy dose of Luke Rubenzer and his side-kick Christian Kirk. They connected on a 38 yard touchdown on their first offensive drive of the game. Then on the second, another solid drive was capped off by a six yard touchdown for Kirk to make it 13-0 after a missed extra point.

Saguaro’s defense was also key early in the game. Queen Creek prides themselves on their great rushing attack which was they key for them to be able to dictate the pace of the game. But the Sabercats did a great job tackling and forced three and outs for the Bulldogs on their first two possessions.

But Queen Creek would settle in with their two-headed monster at running back with last year’s state leading rusher Matt Guida and this year’s 2,000 yard rusher Weston Barlow. Barlow a 30 yard  run to the eight yard line and Guida finished it from there to make it a one possession game. 13-6 after a miss extra point.

The Bulldogs did a good job making adjustments to their game in the first half. Known for running the ball very often, they took to the air in the second quarter and stayed stride for stride with Saguaro midway through the second.

But it was a little too much Christian Kirk to close out the half. Kirk had an ankle breaking 54 yard touchdown run to make it 26-12. Then on the ensuing kick-off, Saguaro recovered a Queen Creek fumble. That led to the fourth touchdown of the day for Kirk on a screen play on fourth and 18 from the 20. Saguaro led 33-12, Kirk had 185 total yards and four touchdowns in the half.

“Throughout the season they worked me into the backfield a little bit more,” explained Kirk. “Last time we played Queen Creek we really didn’t put me in the backfield as much but the coaches just do whatever they can to get me the ball. I’m very thankful for that. They put the ball in my hands and I had to do something with it to get my seniors a championship.”

“We said we wanted to put the ball in our dude’s hands and he’s our dude,” Mohns said about Kirk. “He wanted the rock…we had to run the ball. That’s what they forced us to do. If we’re going to run the ball we want run with our best guys.”

Queen Creek added a 66 yard touchdown run by Weston Barlow, but it was still Saguaro up handily at the half, 33-19.

Saguaro had really been known for what they could do in the air. That could have been seen from the nine touchdown passes Luke Rubenzer had in the semifinal game against Desert Edge. But they really had the running game going and stuck with it for much of the game.

But it was Rubenzer through the air that put the nail in the coffin for the Sabercats. He connected with junior Cameron Koutsalas for a 25 yard strike. It was touchdown number 61 on the year for Rubenzer who passed Desert Edge’s Anthony Hernandez’s 60 for the season. That 61 is a state record for touchdown passes in a season.

In the end, the Saguaro offensive attack, like it had been all of 2013, was too much for the Bulldogs and the Sabercats are state champions once again.

And if the day couldn’t get any better for Saguaro head coach Jason Mohns, he proposed to his girlfriend Sara after the game. So now they both received a ring as a result of the game on Friday.

A state championship and now a fiancé for @saguarofootball HC Jason Mohns pic.twitter.com/DW77NczwDp

“I had a plan,” Mohns said after she said yes. “She’s been real patient with me, especially during football season. This was kinda my plan all year long. There’s something about women who are with coaches and she’s a special girl and I’m in love with her. I’m excited we could share this moment together.”