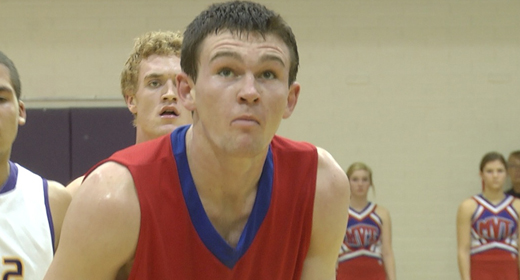 Days before the state of his senior season one of the elite 2014 basketball prospects announced his commitment.

Six foot nine, 230-pound power forward Payton Dastrup of the Mountain View Toros announced that after high school he will be suiting up for Thad Matta and the Ohio State Buckeyes.

“They were the best fit for me,” said Dastrup. “The feeling I got from official visit. Every time I went on visit I saw myself there. The answer was pretty clear. The players, staff, facilities. All-around it was best fit for me.”

“He [Matta] was the one that instituted the whole recruiting,” Dastrup mentioned. “He happened to see me at one game one of my games during a tournament in Vegas that he wasn’t supposed to be at. When he called he said, ‘Payton how would you like to play for Ohio State?’ Because it was a blocked number my response ‘was who is this?’ Then he told me it was Thad Matta and I was like ‘Oh my!’ They got recruiting me right away and it paid off.”

Dastrup chose the Buckeyes over other premier programs like Virginia, Florida and BYU.

He prides himself on his ability to play in the post with his back to the basket or face up as well a mid-range game that makes him very difficult to guard. He’s a force on the boards and if you don’t get out of the way you might end up on a poster. Dastrup’s athleticism and versatility is what’s made Thad Matta eager to land him in Columbus.

“Being a stretch four that can play with my back to basket as well as run the floor well,” explained Dastrup. “They like that I have a good motor, can shoot and having a post man that can stretch the defense.”

Like the rest of the players going out for Mountain View basketball in 2013-14, Dastrup just wrapped up basketball tryouts. We’re excited to report that he did in fact make the team!

Dastrup started playing with this senior class back when he was eighth grade when he was too big to play Pop Warner. Instead he picked up a basketball and this group of friends took him under his wing. Once he got to high school he became the first ever freshman to play on junior varsity as a freshman, made the varsity team as a sophomore and the rest is history.

“We have been playing together for a long time,” stated Dastrup. “I wouldn’t be here without these guys and were are looking forward to finishing things off with a state title.”