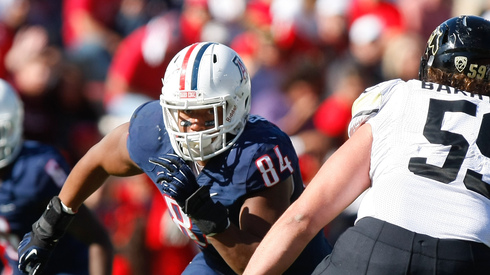 I grew up watching sports with my grandfather and no matter the sport, he is always quick to point out if an athlete having a great season or making a big play that he is from his beloved home town of Chicago, Illinois.

There is a sense of pride no matter where you are from, if an athlete at any level is succeeding and happens to be from your hometown or state. If you have tuned in to watch the Arizona Wildcats football team in 2013 and you happen to be from Arizona, that pride is in full force.

We know about running back Ka’Deem Carey who is in the midst of another remarkable season. The product of Canyon del Oro high school in Oro Valley, AZ’s new record break feat in 2013 after having many after 2012, is he now has 13 consecutive games of at-least 100 yards rushing. He already set the school record in 2012 for rushing yards in a season but now his 2013 total going into this week vs. Oregon has cracked the top five in school history at number four.

But how about Carey’s local supporting cast?

His partner in crime on offense, former Basha high school wide receiver Nate Phillips has had a breakout freshman season. He currently leads the Wildcats in receiving yards and receiving touchdowns and is also fourth on the team in receptions. There was question to whether or not Phillips would even play as a freshman but after emerging in camp after the Wildcats lost their top receiver from 2012 in Austin Hill, Phillips gained more and more reps and is now one of B.J. Denker’s main go-to receiving threats.

It’s easy to over look offensive lineman, but when you have a running back getting at least 100 yards rushing in every game this season, some credit needs to be thrown their way. The Wildcats starting center is from Washington high school and Glendale Community College transfer Steven Gurrola. He has been an important piece for the Wildcats up-front.

Junior defensive end from Fairfax high school in Laveen, Reggie Gilbert, leads the team with four sacks this season. He had a career-high two sacks last week against Washington State. This season, Gilbert has set career highs for tackles (26), tackles for loss (6.5) and sacks (4.0) in just 10 games played. The depth on the Wildcats defensive line was an issue in 2012 and the emergence of Gilbert has helped greatly in that regard for 2013. The Wildcats defense as a unit have 17 tackles for loss and eight sacks over the last two contests.

Senior linebacker Jake Fischer is about to play his final home game in a Wildcats uniform. What a career it has been for the product from Ironwood Ridge high school in Oro Valley. Fischer has played in 49 games in his Wildcat career with 30 starts. Going into Saturday, Fischer has 61 tackles and an interception return for a touchdown this season. For his career that has seen him breakout as a freshman, miss all of his sophomore year with a knee injury and two big junior and senior seasons as a defensive leader on this team, he has racked up 245 tackles, including 16.0 for loss, along with six fumble recoveries and three forced fumbles in total.

And you cant leave out the player Rich Rodriguez called the anchor of their defense, Tevin Hood out of Hamilton high school in Chandler and the very talented Marquis Flowers from Millennium high school in Goodyear.

You throw all this together and see what the Wildcats have done from a recruiting stand point locally going into next season. Salpointe’s Cameron Denson and Kaelin Deboskie, Chaparral’s Trevor Wood, Chandler’s J.R. Hunt and Centennial’s Layeth Freikh are all committed to the Wildcats could have fans from Arizona feeling extra pride in their team with the local talent leading the way in the future.