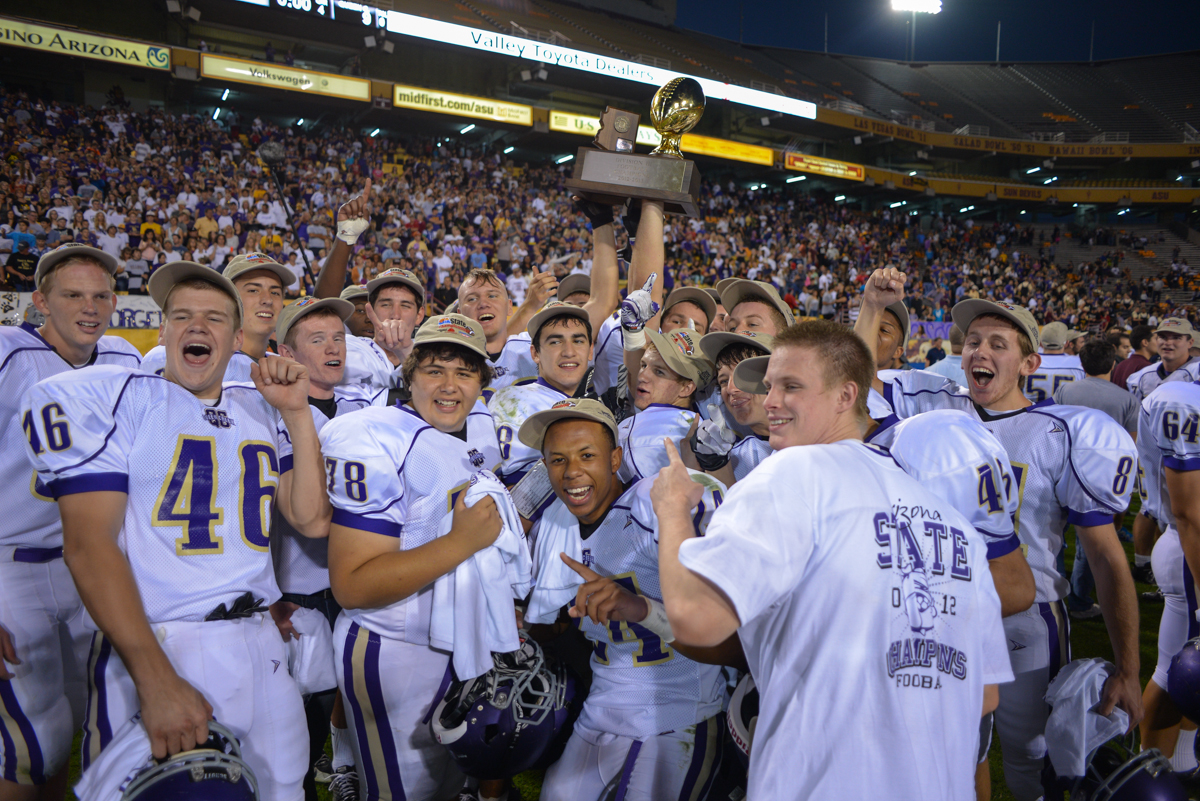 The Saguaro Sabercats and Queen Creek Bulldogs have become new foes over the last few seasons.

They first met with big implications two years ago in the second round of the playoffs when the D.J. Foster led Sabercats knocked out the Bulldogs 56-28. They had not met again until they were moved into the same section this season and played a hard fought game that saw Saguaro prevail 35-28. Besides Saguaro’s one loss this season to division II’s Chaparral, the closest game Saguaro has played this season was that seven point win over Queen Creek.

The defending champion Bulldogs have faced a little more adversity than they did last season. The state’s leading rusher, Matt Guida (video interview below), has spent most of his senior season on and off the field battling injuries. But they did not miss a beat this season with their great rushing attack because of the play of Weston Barlow has been as good as any running back at any level in Arizona.

It will be the Luke Rubenzer by air against the Barlow by ground. The defense that can contain one of those two the best, will prevail.

Saguaro QB Luke Rubenzer vs. Queen Creek LB Nate Neville: Rubenzer is having one of the best seasons we have seen from a quarterback ever and coming off a game where he put up video game numbers with only four incompletions in 29 attampts, almost 550 yards passing and nine touchdowns. The Bulldogs are going to need their ball hawk on defense, Nate Neville to contain Rubenzer as much as he can by blizting him, preventing him from big rushing gains or covering the middle of the field. Neville is the quarterback of the defense and will need to be on his A game to slow this blistering Saguaro offense.

Saguaro OT Alex Anderson vs. Queen Creek DE Skylar Bollman: Queen Creek will have to get pressure on Rubenzer and the one guy they will hope to do that the best will be a player with nine sacks on the season, Skylar Bollman. Him and fellow d-lineman Dejon Thompson are very talented and could set the tone in the trenches. But they have to get past Alex Anderson and the Sabercat o-line who have done a great job this season.

Saguaro WR Christian Kirk (video interview at the top) vs. Queen Creek defense: You cannot let one person beat you. Rubenzer has the ability to spread the ball around make plays but with what Christian Kirk can do when he has the ball in his hands, he can single handedly take over the game out of the wide receiver, running back or kick/punt returner spot. The Bulldogs have to contain Kirk.

Saguaro Safety J.T. Nettleton vs. Queen Creek RB Weston Barlow: Weston Barlow has over 2,000 yards and 22 touchdowns on the season. He has big play ability and if Queen Creek gets their run game going with Barlow, they will control the pace of the game. The last line of defense for Sagauro is Nettleton. I am going to go out on a limb and say that Saguaro will stack the box against the Bulldogs on defense which will mean Nettleton will play center field. If Barlow can sneak past the Sagauro defensive front, it will be up to Nettleton to prevent the big play.

#2 Saguaro and #4 Queen Creek kick-off from Arizona Stadium on the campus of the University of Arizona at 1pm on Friday.