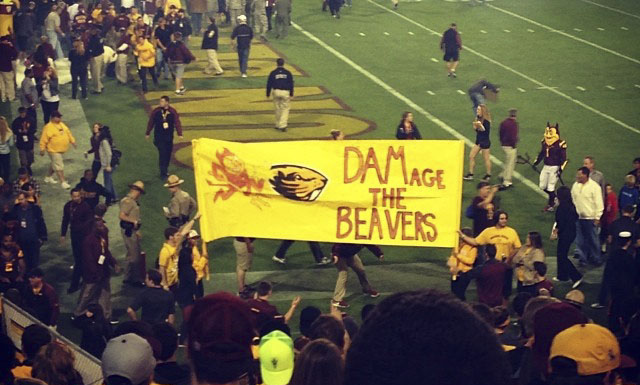 An impressive showing by the Arizona State defense led the Sun Devils(8-2, 6-1) past Oregon State(6-4, 4-3) 30-17 Saturday night. The win sets up a showdown with UCLA next Saturday at the Rose Bowl in Pasadena. If the Sun Devils beat the Bruins, they clinch the Pac-12 South Title.

Some quick hits from the victory…

With the win, ASU still controls their own fate for the Pac-12 South title. WIn the the final two games against UCLA and Arizona the Sun Devils might find themselves in position to host the Pac-12 title game. USC beating Stanford opened up the possibility for ASU to have the Championship game on their home field.

Once again, the ASU defense closed out the game. Robert Nelson with the pick-six with just over five minuets to go pushed the lead to 20. Beavers quarterback Sean Mannion threw 4 interceptions

Marion Grice ran for 118 yards and scored a couple of times on short plunges. His biggest play of the night might’ve been falling on top of a onside kick by the Beavers with just under three minuets to go in the game.

Next up, at UCLA. So much on the line next Saturday. Last year, the Bruins rallied to win on the Sun Devils home turf. The start time for the UCLA game will be announced sometime on Sunday,