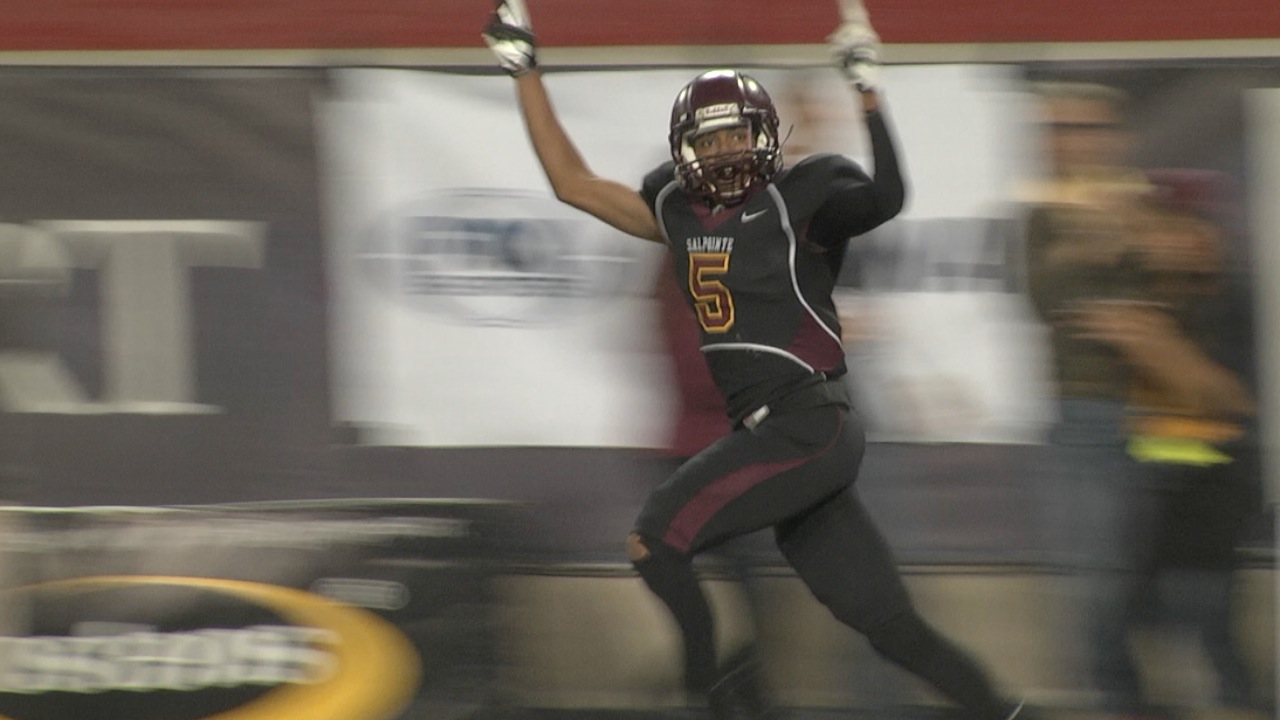 Sometimes you can’t mess with perfection.

Just ask the Chaparral Firebirds who traveled down to Tucson and were promptly drilled by the hometown Salpointe Lancers 46-20 in the Division II Finals Friday night at Arizona Stadium. It capped a perfect season (14-0) where the private Catholic school outscored their opponents 697-101 in 2013 to claim their first state title.

“It’s just a tremendous feeling,” long-time head coach Dennis Bene said on the field after the victory. “Just really proud of our kids. They played so hard tonight. Our coaches have done an amazing job. I’ve had so much support over the years. I’m really thankful.”

Chaparral (12-2) came out fired up.They forced the Lancers to go three and out on their first possession and then after a poor punt, the Firebirds started at the Salpointe 22. That lead to Tyler Whiley powering his way in the end zone on a rushing touchdown giving the Firebirds a quick 6-0 lead.

Salpointe had not trailed in a game all season and had only given up three total points in the first quarter all season.

But the Lancers would respond. On a long drive which would take up most of the remaining minutes of the first quarter, quarterback Andy Cota found playmaking senior receiver Kaelin Deboksie to tie the game up.

Then Salpointe would take advantage of Chaparral mistakes. The Firebirds would misplay a punt snap. The Lancers would take over and one play later it was Cota hooking up with Deboskie for a 16-yard score. Chaparral’s ensuing drive on offense would fumble the ball and Salpointe senior captain and defensive end Austin Weaver would return the fumble to the Firebird four. That led to a Jay Williams four-yard touchdown run and the Lancers, in what seemed like a split second, took a 19-6 lead.

Then it was Salpointe’s turn to have a slip up. They misplayed a punt of their own and turn it over to the Firebirds on their own one yard-line. But the talented Salpointe defense stepped up huge and put together an incredible goal-line stand forcing Chaparral to turn the ball over on downs.

The result of the defensive stand? A 98-yard touchdown pitch and catch from Cota to the play-making Cameron Denson. That broke the game up to a 26-6 lead for Salpointe. Which would be the score at the half.

“When their defense lined up in the wrong formation we tried to exploit that,” Cota explained. “We’ve got some playmakers on the team such as Cameron and Kaelin so [I] just try to get the ball in their hands and let them do what they do.”

The ‘Birds started the second half like they did the first: with a touchdown. Elijah Castro capped a 90-yard drive with a two-yard scoring plunge to cut the lead in half 26-13. UofA commit Trevor Wood reeled in a 32-yard pass putting the ball into Salpointe territory. The drive was aided by a defensive penalty on a play it appeared quarterback Sean Paul Brophy fumbled.

The next Chaparral mistake was kicking to the Wildcat-commit Denson who promptly caught the kickoff and streaked 84 yards down the Lancer sidelines killing any momentum the Firebirds had from their scoring drive.

Following a Brophy interception in Salpointe territory Denson made it a trifecta on a one-handed 34-yard corner fade from Cota pushing the lead to 39-13 less than halfway through the third quarter. He finished with four catches for 148 yards and two scores.

“It made it that much better,” Denson said about playing so well in front of his home crowd on the field in the stadium he’ll call home the next four years. “[We] had the entire city of Tucson behind us and that just means a lot to me.”

The hometown Lancers put a nail in the coffin when Wood mis-handed a snap in punt formation near his own goal line, then promptly shanked it off the side of his foot. The eye-level punt was snagged in mid-air by up-man Jacob Ksiazek who returned it just even yards blowing it wide open early in the fourth quarter 46-13.

Cota, the Tucson Sunnyside transfer, was nearly perfect completed 12-14 for 266 yards and four touchdowns. Seven of those completions went to Deboskie who tallied 112 yards and two scores of his own.