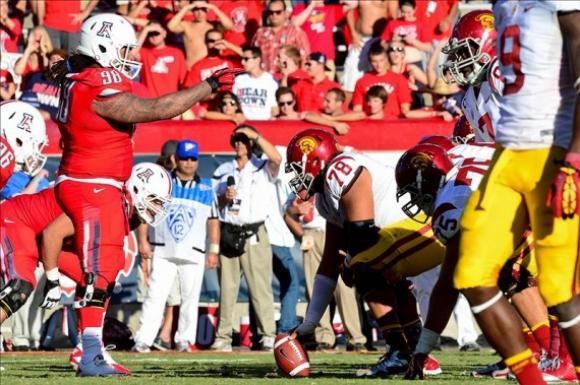 As the Arizona Wildcats land in Los Angeles for their Thursday night game against the USC Trojans, they enter an environment that has been as much of a circus as any football program in the country.

It has been a rocky 2013 to say the least for the men “speaking victory” as they fell to recent Pac-12 bottom feeders, Washington State, at home, barely sniffed out a win over Utah State at home and then looked to have hit rock bottom as they got blasted by Arizona State in Tempe, 62-41.

The disappointment in the USC world led to Athletic Director Pat Hayden firing head coach Lane Kiffin before he could return to his home after the road trip to Tempe.

But in steps interim head coach Ed Ogeron who is looking to salvage SC’s season and instill new life into a proud program facing one of it’s most frustrating seasons in quite some time. After an embarrassing loss and a new coach at the helm, the Wildcats know they are in for quite the battle despite all of the off-the-field situations.

“I would hope we would play normally like ourselves no matter what but I did tell the players that this game is going to be more difficult because USC is going to play extremely fired up, loose and come out with a chip on their shoulder,” said Arizona head coach Rich Rodriguez. “We will get USC’s best shot.”

Rodriguez is familiar with Ogeron. He mentioned that two have met on the recruiting circuit over the years. But it is the first time they have coached against one-another and he mentions his team is preparing for anything out of the ordinary.

“It won’t be unusual if USC did,” Rodriguez explained. “I don’t know if you can prepare for it but we’re expecting it because we are saying, ‘this is what they’ve done but with a new offensive play-caller, this is what they can do as well.’ It’s really hard for our defensive guys to prepare exactly what USC is going to do. We have to be prepared in seeing a little of everything.”

“It’s going to be different this year,” mentioned Wildcats linebacker Marquis Flowers. “We have to make the same plays but hopefully more. We can’t go off last year. It’s a different team. We just have to go out there and execute.”

On the Wildcats side of the ball, a lot of scrutiny was thrown at quarterback B.J. Denker for his 14 for 35, 119 yard and two interception performance last time out against Washington. Denker has since spent a lot of time in the film room and Rodriguez has not been to himself about how much he expects Denker to improve.

Denker’s teammates are also rallying around him.

“I think we need to continue pressing forward,” stated Arizona receiver Terrence Miller. “I think the receivers have done a pretty good job with what we have gotten as far as the defenses we have lined up against. We just have to keep pressing a little more and instead of being barely open we need to be really open. Running routes and making B.J. more confident in throwing the ball because he has all the tools. He just needs a little bit of a confidence boost, and I think it is going to come from the receivers.”

Another concern for the Wildcats except on the other side of the ball is the health of their senior leader, linebacker Jake Fischer. The team’s leading tackler from 2012 is listed as questionable in the game because of an ankle injury.

“I haven’t heard anything on him but obviously Jake is a big factor on defense,” mentioned Flowers. “We believe in whoever is going to step in if they have to step in and play. Hopefully, Jake plays.”

The Wildcats will look to bounce back after their first loss of the season in front of a national audience Thursday on Fox Sports 1. Kick-off is at 7:30 pm from the tradition-rich Los Angeles Colosseum.