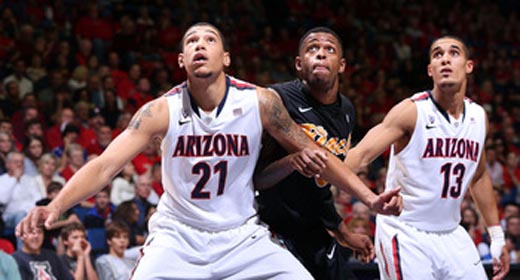 Even for some of the best in the country.

Case in point University of Arizona forward Brandon Ashley who, despite being one of the most decorated prep stars two years ago holding offers from Kentucky, UCLA and Oregon, struggled at times to find his place on the court as a true freshman.

“Consistency is something I may have struggled with a little bit last year,” the 6’8, 235-pound sophomore told Pros2Preps.com. “I think the fact you come from high school, where you kinda dominate. You don’t have to play as hard. Come to college and everyone is big and strong and as talented as you.”

As the Wildcats’ season progressed so to did Ashley’s game. He finished averaging a modest 7.5 points and 5.3 rebounds a game but played his best ball in the Pac-12 and NCAA tournament.

Just watching his transformation early here in our team workouts he knows where to be and how to do it so much better than he did a year ago.

Now the stakes are even higher heading into his sophomore season in Tucson and he appears up for the challenge of building on last year’s late-season success.

“Brandon had a big role as a freshman,” head coach Sean Miller said. “He’s very talented. I think he put a lot of work in. Just watching his transformation early here in our team workouts he knows where to be and how to do it so much better than he did a year ago.”

Ashley will need to be at the top of his game after the ‘Cats lost a trio of talented frontline players. Steady wing Kevin Parrom graduated, as did Solomon Hill who became a first-pick of the Indiana Pacers last summer. Fellow freshman Grant Jarrett left UofA and was the 40th overall selection by the Portland Trailblazers before having his rights traded to Oklahoma City.

The ‘Cats are still loaded with key freshmen like Aaron Gordon and transfer T. J. McConnell. Miller said this team is more versatile with several players on the roster able to play multiple positions, including Ashley.

“The fact that we’ve been there…made it to the Sweet 16, that was big for us,” Ashley explained. “We have some guys who know what they’re doing and we can all be leaders together.”

Judging from what Miller and the Arizona coaching staff has seen early this fall Ashley certainly knows what he’s doing with a year of growth and experience under his belt.