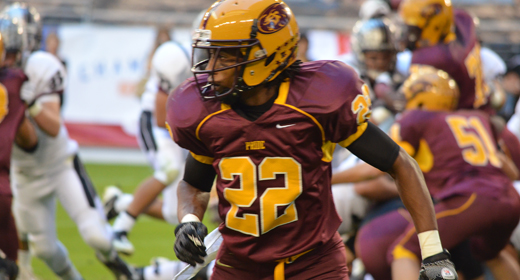 Mountain Pointe appears to be the class of Division One as we hit the halfway mark of the football season. The Pride are undefeated and in the process have taken care of business against Chandler and Hamilton. They overwhelmed archival Desert Vista 49-6 in the Ahwatuckee Bowl Friday night in a result that Pride coach Norris Vaughan said “ended up about what we expected.”  Brophy is next up for Mountain Pointe.

Rivalries are part of the fun of high school football and next Friday is one of the best in the state in my opinion. Show Low hosting Blue Ridge. If you haven’t made the trek to the White Mountains to see these two communities get after it, you’ve missed out. It has a 1990s Brophy v St. Marys feel.

Chandler beating Hamilton was a big step forward for a Wolves program that has always had the athletes to beat the Huskies, but could never put together a complete game. Hamilton is beat up, banged up, and in some instances beating themselves. Chandler made plays, the Huskies couldn’t. Plain and simple.

To my knowledge Hamilton has never lost three games in a row. They have Basha next Friday night at home. The Bears haven’t been able to stop the run in their losses to Centennial and Westview. Neither team wants three losses on their postseason resume. Should be a terrific matchup. By the way, don’t sleep on Westview as a title contender.