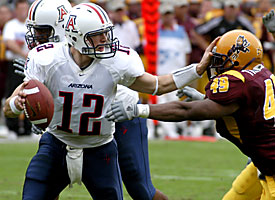 A renovated weight room, beautiful new field turf and one of the best young coaches in the Arizona in Kris Heavner.

The former University of Arizona quarterback has led the Huskies to a 7-1 record in his first season at the north Scottsdale school after serving in the same capacity at Tucson Santa Rita last year.

“This is a very simple system. I told the coaches when I got here…it takes us three days to install this offense and that’s it.”

Heavner has had the itch to coach long before his eligibility expired at UofA in 2007. The Johnson City, Texas native and former all-state performer at Lyndon B. Johnson High School just west of Austin served as Mike Stoops’ offensive graduate assistant until 2011. He was not retained by Rich Rodriguez and set his sites on high school coaching.

After taking over as head coach at Tucson Santa Rita for one season Heavner jumped at the opportunity to take over here in Scottsdale.

So far, so good as the 6th-ranked Huskies have outscored their opponents 429-208 entering their showdown with 8th-ranked Pinnacle (6-2) in north Phoenix.

Heavner insists his offense is based much more on execution than a complicated scheme even though HHS has rolled up big numbers through the first eight games.

“This is a very simple system,” he explained to Sports360AZ.com after practice Tuesday. “I told the coaches when I got here…it takes us three days to install this offense and that’s it. After three days they could play a game. They didn’t believe me. Thought I was crazy and that’s what we did.”

The guy spear-heading the attack is quarterback Dalton Sneed. The junior, who is drawing interest from Division-I schools including Arizona State, has rolled up over 3,000 yards of offense and 34 total touchdowns.

“He made [the offense] very easy,” Sneed told Sports360AZ.com. “He slowly installed it in the spring. Bits and pieces were added on. He made it very easy for us to understand. Throw the ball a lot. Get to spread the ball around. Score a lot of touchdowns. That’s what it’s all about.”

Heavner said his toughest transition this season is off the field, not on it. Heavner’s wife and two young kids are still in Tucson for the time being. He stays in Phoenix during the week and commutes down on the weekend.