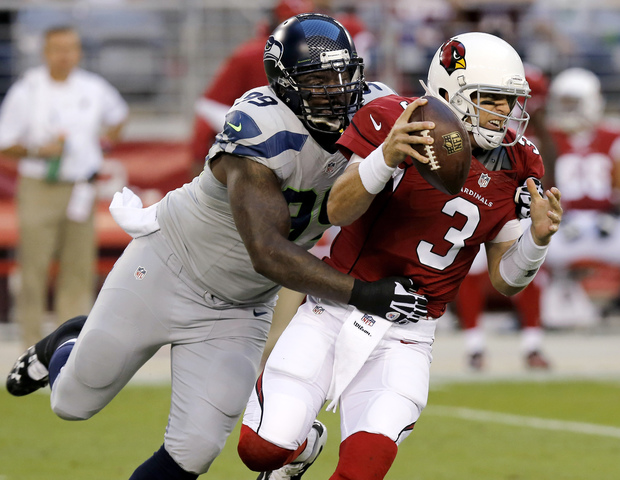 The Arizona Cardinals will have 10 days to recover from Thursday’s 34-22 loss to the Seattle Seahawks in a game which wasn’t as close as the score indicated. Any hope of pulling to within a game of the NFC West-leading Seahawks (6-1) were squashed as Arizona (3-4) dug themselves a 14-0 first-half hole which proved too much to overcome.

Here are five things we learned from the Cards eighth-straight NFC West loss.

1. If not Carson Palmer, who?? Social media was buzzing with every arm chair quarterback crucifying the play of Palmer who, without question, struggled again. That’s fine if you want to pull him but please present me a better option. Remember, Drew Stanton hasn’t taken a regular season snap since 2010 and I’ve thrown as many career touchdowns as third-stringer Ryan Lindley who was tossed to the wolves last year as a rookie. A little curious Bruce Arians didn’t give Stanton some reps late in the fourth quarter. Regarding Palmer…please keep this in mind. The Cards had 30 rushing yards on 18 carries against Seattle. 30!! Drew Brees and Tom Brady don’t stand a chance against the Seahawks attacking defense facing second-and-nines and third-and-twelves the whole game.

2. Floyd emerging: Second-year wide receiver Michael Floyd caught six passes (10 targets) for a team-high 71 yards. After being a complete flop as a rookie (averaged less than three receptions a game) he’s already caught 32 for 416 yards and a score through seven games. He was able to consistently work free against Seattle’s big, physical corners and will get even better with more game experience and learning under Larry Fitzgerald.

3. Todd Bowles’ defense deserves better: Most of the hype Thursday was directed at Seattle’s #2 overall defense and deservedly so but the Red Birds have some talent in their nest, as well. Calais Campbell, just five days after being taken off the field on a stretcher in San Francisco, was simply unblock-able registering a team-high eight tackles, spending most of the game in the Seahawks’ backfield. Analyst Mike Mayock believes Daryl Washington has a chance to be a “top 30-40 player in the league.” Tyrann Mathieu continues to look like a complete steal in the third-round. If the offensive struggles continue and the losses pile up you have to wonder if there will be resentment in the locker room. Lots of prideful players on that side of the ball.

4. Sowell train derailed: It’s safe to say Bradley Sowell now knows what it’s like to be Levi Brown. Brought in off the scrap heap from Indianapolis he was completely overmatched on the edge in obvious passing downs (pretty much every second and third down play). The already depleted, below average offensive line also lost veteran Daryn Colledge who hurt his back chasing down the play after Palmer’s second interception.

5. Seattle’s Best:  Make no mistake about it, the Seahawks are the cream (sorry, couldn’t resist) of the NFC West and could be lining up opposite their old AFC West nemesis Denver February 2, 2014 at the Meadowlands. Russell Wilson plays with the poise of Joe Montana and Marshawn Lynch and their trio of bruising backs off-set average receivers which will get a significant boost with the return of Percy Harvin. As for the defense…well…just put on the tape from Thursday night.