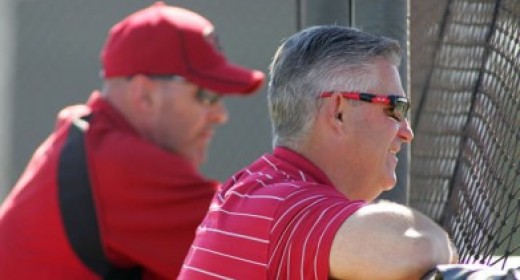 There are rumblings the Arizona Diamondbacks may go back to the drawing board this winter.

No, you won’t see a complete makeover on the field next spring but the Dbacks will look to shake up the batting order by adding more power. Manager Kirk Gibson and general manager Kevin Towers re-build the roster last winter replacing free-swingers with more veteran, patient hitters. The results were mixed and the front office concluded adding another run-producer would be on the to-do list this off-season after Jason Kubel struggled before eventually being designated for assignment.

Arizona will likely be priced out of the Robinson Cano Sweepstakes but another American League slugger could make sense. Current Texas Ranger Nelson Cruz is expected to garner quite a bit of interest on the open market if the asking price for Nolan Ryan’s club is too steep.

Cruz fits the mold of a corner outfielder with the ability offensively to leave the ballpark once he steps in the batter’s box. It’s the kind of threat Arizona sorely lacked this past season.

Cruz missed those two months after being suspended for testing positive for performance enhancing drugs. He returned on September 29th before the Rangers one-game playoff loss to Tampa Bay in Arlington.

Gomez doesn’t believe the suspension will scare teams away from throwing big dollars at the 33- year-old who made $10.5 million in 2013.

“Despite the bio-genesis suspension, we saw it last year with someone like Melky [Cabrera] who was suspended,” Gomez explained. “The Blue Jays turned around and gave him two years at $16 [million]. Kevin Towers is going to look at all his options and if they’re going to add a power bat that name [Cruz] is certainly going to come up in their internal meetings, no question.”