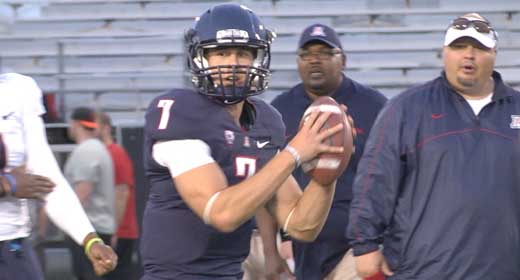 The start of the college football season is just hours away.

With kick-off to the 2013 Arizona Wildcats football season approaching, there is still yet to be a definitive answer to who will be the starting quarterback of this team.

Based on comments throughout fall camp, you can see the starting job pointing in the direction of senior B.J. Denker. He was the back-up last season and got some time when Matt Scott was dealing with a concussion.

“B.J. Denker was a front-runner coming in,” head coach Rich Rodriguez said this week in his press conference. “In the beginning of camp it was a mix, and in the last week or so B.J. has gotten better. He’s still the front-runner but we’ve got a few more practices before the week is over.”

Now is that a good or a bad thing? I say neither but could be a cause for concern. Denker started off as the front-runner and has stayed that way through camp despite Jesse Scroggins being on and off the field due to injuries or illness and freshman Anu Solomon who is just not quite ready and up to speed to take over the first-team offense.

If Denker was the front-runner and has improved while everyone else around him has not, why hasn’t he been named the number one guy for at least week one?

I say that but will contradict myself and say that at this point, it really doesn’t matter who is the number one guy when Arizona takes on Northern Arizona on Friday. It is a game that if all goes as planned, the Wildcats should be up a considerable amount and multiple quarterbacks should have the opportunity to see time on the field.

“It doesn’t really matter to me,” he said. “Only one can be on the field at a time so whoever Coach Rodriguez chooses to be out there is fine with me. I would say that I’m very comfortable with all of our quarterbacks that are in the competition so whoever gets the job I’m sure will do fine.”

Rodriguez mentioned that they don’t treat the quarterback position differently than any other and that a player could be a starter one day and then not the next. He speaks to that to the inexperience that the team faces in just his second year running the program.

As far as I am concerned, while the answer at quarterback should be set in stone before this, Rich Rod doesn’t have to know a definite starter until the the fourth game of the season which is Pac-12 game number one on the road against Washington. Treat the first three games as preseason type games with regular season intensity because all should be victories in the end.

Right now it seems like B.J. Denker might not be the answer and that is the reason he has not been named the starter yet. So treat the start of the season as the final test for finding “the guy.”