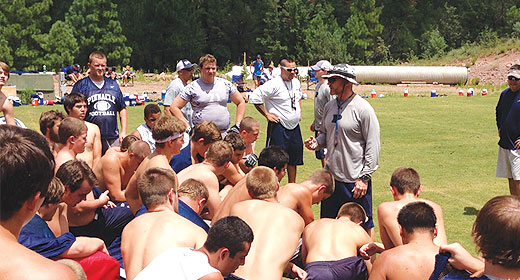 As Pinnacle football gets ready for fall camp, they decided to take a trip up north to get away from every day life distractions.

There are few places better to achieve that than history and tradition rich Camp Tontozona. And the Pinnacle football team made their way up there last weekend for the second consecutive season.

“One of the things my seniors told me from last season when I had my exit interviews with them was ‘coach you have to go back to Tontozona,’” Pinnacle football head coach Dana Zupke said. “Because there is no electronics and no cell service, guys aren’t texting their girlfriends the whole time. They are there interacting with each other.”

“It wasn’t bad at all,” mentioned Pinnacle senior running back Josh Hoekstra. “It gave everybody a real chance to talk with people they don’t know too well or make friendships stronger then they currently are, considering there were no distraction. All and all it was an amazing and fun experience.”

Pinnacle had three three-a-day practices at Camp T. A morning conditioning practice, two full practices and then meetings at night. It was a full plate for the Pioneer players. Zupke mentioned that they players would measure up to seven to seven and a half hours of field time per day.

“It was pretty demanding,”Zupke mentioned. “They were pretty worn out by the end of camp.”

“I thought the trip went very well,” Hoekstra added. “I think that everybody got a lot closer with each other and came together more or less like a well oiled machine. I think we will have a very strong team this year on both sides of the ball.”

Looking ahead to 2013, Pinnacle is coming off another very solid regular season. In fact in the last four seasons, they are 33-10. However, they have had trouble continuing that momentum in the playoffs.

“Josh and Cole have really set the bar high because you have two kids who are very talented and don’t rely just on that talent,” explained Zupke. “They are two of our hardest workers in the weight room, they are very coachable and positive. They exemplify all of the core values that we want to install in our program.”

While up at Camp T, Pinnacle voted on their captains for the upcoming season. Hoekstra and Neubauer were two of them. But the third voted in is a junior who hasn’t had a lot of time at the varsity level. Junior quarterback Brian Lewerke has made his presence felt the moment last season came to an end and former signal caller Michael Sanders graduated.

“I don’t typically get a junior as a captain but Brian has really emerged as a leader,” he explained. “He is one of them because that is how well regarded he is as a leader as well.”

Lewerke has had a busy off-season as he competed in the Elite 11 camps and various college camps around the country. Most notably he was one of three quarterbacks that had a private workout in Alabama with Nick Saban and had a one-on-one interview with him after. Lewerke already has one division I offer from Arizona State.

On paper the Pioneers on offense looks to be their biggest strength. They did lose big players on offensive line in Billy Nichols, Jekabs Kness-Knezinskis and Carson Purtell. But coach Zupke believes there will be guys that will step in and fill the void. He mentions that they might not be as big up front, but they expect to be as athletic if not more so then they were in 2012.

Pinnacle is returning their three top playmakers at the offensive skill position. Their top two receivers from last year in Dan Galindo and Cules Rose as well as Hoekstra who as mentioned led the team in rushing a season ago. Not to mention they have Lewerke who Zupke has full confidence in to get these playmakers the ball.

“I’ll be honest as a program on defense we have never been as stout on that side of the ball as I would like,” Zupke explained. “We feel like we have taken some measure to really sure that up. One thing is for certain, we are much more sound in our scheme and our techniques. We are much more athletic than we have been the last two years as a whole on the defensive side.”

Pinnacle added a few transfers in the offseason as well. One of which is senior wide receiver and defensive back Ayden Richards from Saguaro. He played with Pinnacle throughout the summer but is not for certain that he will play with them this season because he and his family are going through the transfer hardship process. He could be an impactful player for the Pioneers next season and is a player that Coach Zupke loves.

The Pioneers kick off their 2013 season against Red Mountain on August 30th. Check out a slide show from Pinnacle’s trip up at Camp T.

no images were found