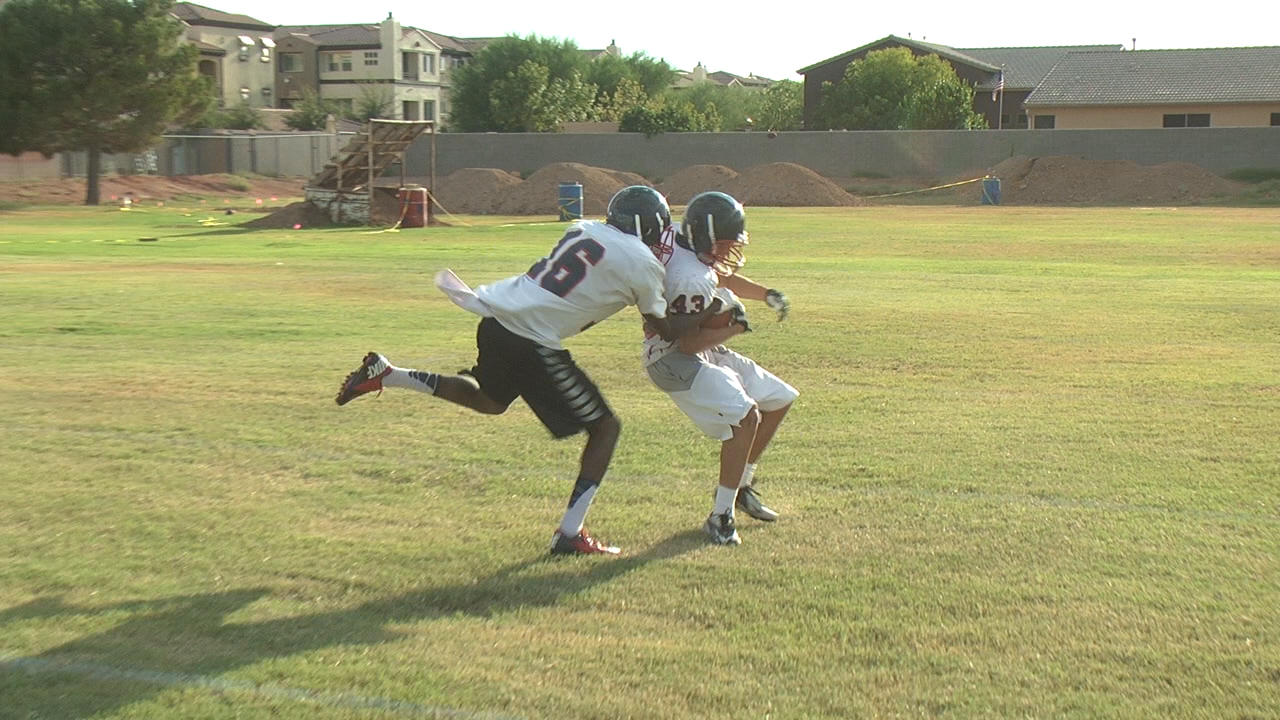 Centennial Head Coach Richard Taylor doesn’t just let anyone walk on his varsity squad and suit up. You’ve got to be at a certain talent level, a certain character level and a certain mental level in order to be a Coyote.

That’s what makes the story of Isaac Steele so intriguing. After one year in Taylor’s system, he’s already moved up to that coveted varsity level, and will get a legitimate shot to be a starter as a sophomore.

“We’ve been very impressed by him,” Taylor said. “He’s got a real good chance of starting at corner[back] for us, and he’s performed better than most sophomores would.”

“Most sophomores aren’t ready psychologically, socially, physically for what is gonna happen on varsity, [but] Isaac has,” Taylor said. “He’s prepared himself, he’s ready and he’s looked real well this summer.”

Steele takes no days off. He stays in the weight room and he stays dedicated to his craft, to be the best cornerback and possible quarterback that Taylor and the Coyotes have ever known.

“What I offer to the team is hard work, work when nobody else is looking, be the first one on the field, last one off and keep mastering everything,” Steele said.

Steele impressed Taylor, his coaches and his teammates during the summer passing leagues, ranking as one of the team’s leading interceptors. Steele initially came to Centennial with the mindset of being a quarterback, but pulled off of that and told Taylor he’d rather be a cornerback instead.

Taylor’s first impressions of Steele was that he could see him challenging for the starting position at quarterback, but his cornerbacks coach wanted Steele to take a crack at being a starter for him, so that’s the route Steele decided to take.

“That was a little disappointing to me, but we don’t want to make anybody play a position they don’t want to play,” Taylor said. “That could change. I think he’s trying to give all his concentration to cornerback right now, but he is an outstanding quarterback prospect as well.”

He’s been playing quarterback since he was six years old, and just because he decided to pursue things on the defensive side of the ball, doesn’t mean he won’t decide to jump and compete for the starting quarterback job in his junior year or his senior year.

It seems like Steele wanted a bigger challenge and to expand his horizons a bit with his pursuit of a starting cornerback position. He feels that’s a tougher position to master than quarterback.

“You’ve got all those responsibilities, different coverages: Cover 3, Cover 2, locking onto the receiver,” Steele said. “Everything’s quick, on varsity everything’s a lot quicker, but I’m getting it down, doing a little better.”

At the camp up in Seattle, Wash., Steele focused on cornerback, while down in Tucson, Ariz., his focus was on quarterback, so he got the best of both worlds in the camps.

“At quarterback, they worked on my drop back and my throwing form,” Steele said of the Arizona camp. “They kind of changed it up a bit.”

The last thing Steele wants to do is come in and alienate and disrespect the upperclassmen who’ve worked so hard to be in the position they’re in.

Steele is a young man of faith, along with his siblings. His parents are both Pastors, so he has no problem showing the proper respect when it’s due. That’s a big reason why Steele’s been taken in with open arms by his older brothers on the team.

“All seniors expect to be respected by sophomores, but at the same time, he competes against them,” Taylor said. “He’s not afraid to compete and the upperclassmen respect that. They know he’s out there to win a position, and they’re okay with that.”

“God gave me the talent to be this good, and I thank Him for it every day,” Steele said. “I just gotta stay working hard, always be humble, trust in my teammates, do all the good things and have good grades.”