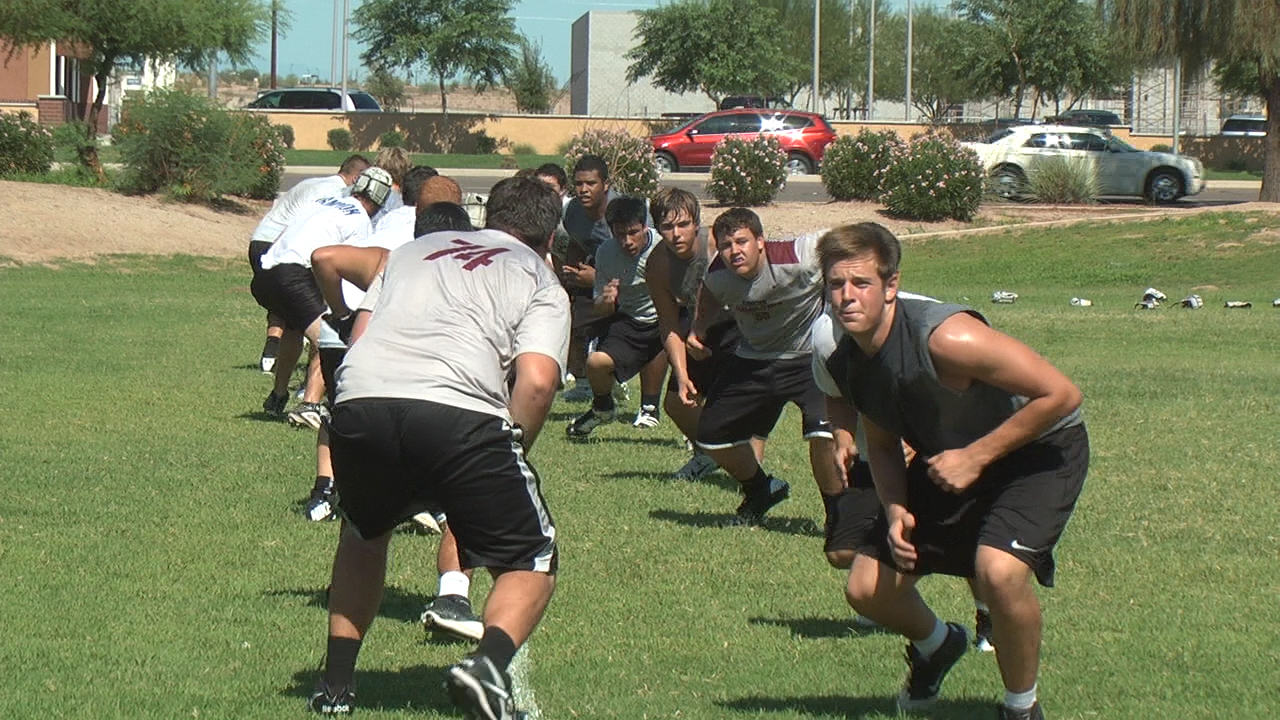 Their 2012 season couldn’t have started off any worse. They fell to Mountain Pointe in a close game, then went over the pond to Dublin, Ireland and dropped to 0-2 with a loss to Notre Dame out of Sherman Oaks, Calif.

Then it just clicked for the Huskies. They lost no more games for the remainder of the season, capping things off with yet another state championship, getting revenge on the Pride with a 31-16 win in the title game last November.

Hamilton returns their biggest group of seniors – almost 50, with 20 of them as starters – ever to the 2013 version of the Huskies, which head coach Steve Belles believes will be another positive step for the program.

“I think as long as you can funnel it in the right direction and the experiences you’ve had and understanding that they have to be the ones that encourage and the coaches will kind of be the jerks on the field,” Belles said. “The players will encourage and get the kids ready to go and take care of stuff when the coaches don’t need to be involved.”

Where the rubber will meet the road with the Huskies is when the real contact is allowed: when the pads come on.

“When we put pads on, it’ll basically separate the boys from the men and kind of who’s worked hard and who hasn’t,” Belles said. “Overall, I think coaches along with myself are very happy where we are.”

With it being a senior-heavy group, you’d expect the chemistry to be very strong, since a great majority of the group have been through war after war with each other on the fields, and it is.

“It’s about team first, individualism second,” Belles said. “You can grow a team and not a bunch of individuals [and] great things will happen.”

“It’s kind of hard for a high school kid to figure that out early, but I truly believe the best teams win championships,” Belles said.

If anyone knows about winning championships, it’s Belles. Since 2006, he and the Huskies have won five state championships.

Senior quarterback Sammy Sasso was the second string quarterback last season, so he got a chance to experience the Huskies run to glory. A year later, he’s the man running the show, and with the talent he has around him, he thinks the sky’s the limit for the Hamilton offense.

“We have some great athletes, and I’m excited that they’re surrounding me,” Sasso said. “It’s so easy to be the quarterback when you got athletes around you like I do.”

Sasso’s been with the program for his entire career. He isn’t new to being a starter for Hamilton. He did it in both his freshman and sophomore seasons, so it’s been a natural progression for him to his current position.

“It’s been a great learning experience,” Sasso said. “I have great coaches backing me up, I’ve learned so much being a quarterback and being a leader and how to win a state championship.”

If you look at who the Huskies have in their secondary this year, you’d think their opponents wouldn’t be able to complete a pass at all, let alone gain positive yardage, because the three-headed monster they have – Juwan Jones, Josiah Pola and Jalen Jenkins – are all seniors and they like to hit.

Jones really has no words for the feeling he gets when he puts a lick on a wide receiver or tight end or a running back.

“Blowing somebody up? I can’t describe that one,” Jones said. “As a player you know, but it’s hard to explain to those who haven’t played it. I recommend you trying it out one of these days.”

Jenkins falls in line with Jones’ sentiments about the secondary and he’ll even extend it out to the entire defense as as whole, when speaking on just how good the group is.

“It’s hard,” Jenkins said when asked how hard it will be to score on the Huskies’ defense. “We’ve got athletes all over the field. We have [defensive] linemen, linebackers, corners, safeties. All of our positions are good.”

“It’s gonna be tough,” Jenkins said. “Having eight people come back, we’ve got an experienced defense.”

Belles and the Huskies will face some serious competition this year being the defending champs. That target spoke of earlier will not leave their vicinity any time soon.

“There’s teams out there that could care less that we won it last year, except that they want it,” Belles said. “You gotta be the one out there hungry and not the hunted. You want to be the hunter still.”