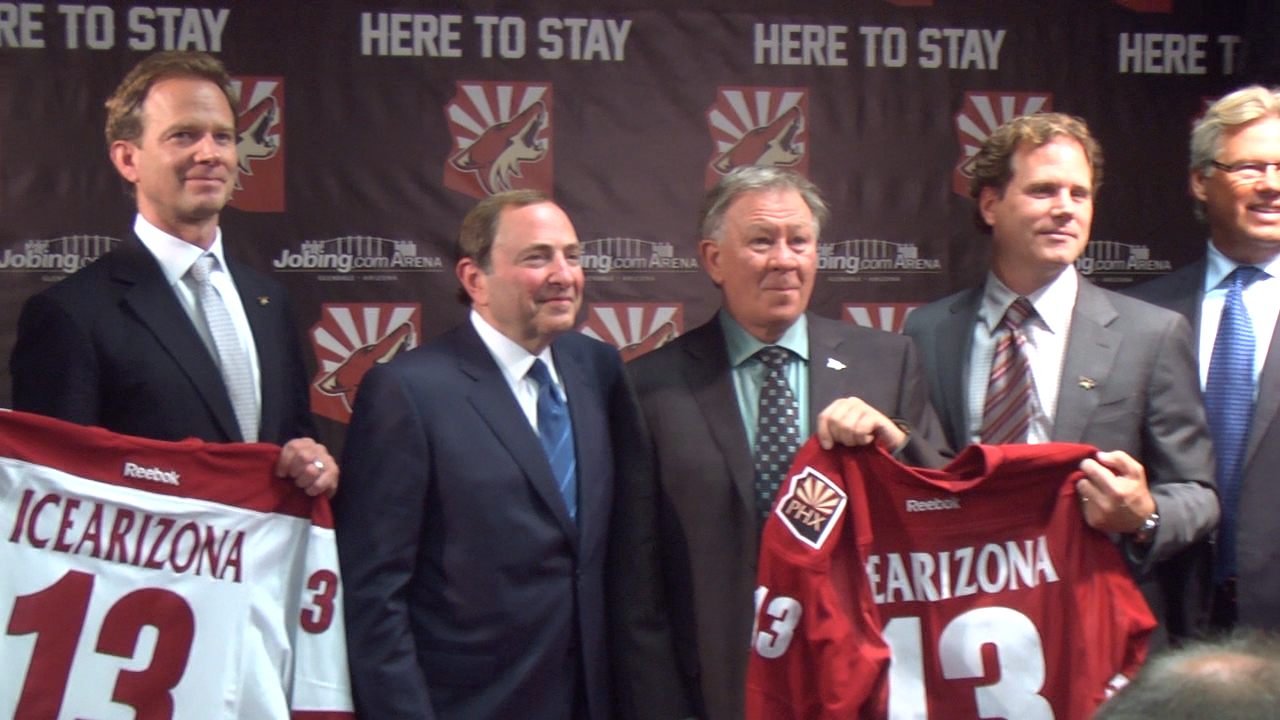 The Phoenix Coyotes and their fans can finally breathe a sigh of relief now that the team has official ownership: IceArizona.

The sale and ownership transfer to IceArizona was made official on Monday, as the four-year “owner-less” saga is finally over.

Renaissance Sports and Entertainment, LLC will be the managing partner of IceArizona.

“This is a day that we believed, since the beginning of these proceedings four years ago, should take place, because it would be the right thing for the great fans that we have here in the Valley of the Sun,” NHL Commissioner Gary Bettman said at a Tuesday press conference at jobing.com Arena.

It was no doubt a long and arduous process in finally nailing down ownership for the Coyotes, but Bettman believes that the struggle was well worth it in the end.

“I believe with new ownership, people can unabashedly, without restraint, give their emotions to this club because you don’t have to worry about it’s future,” Bettman said.

“We believe that hockey and the Coyotes can and will be successful here,” Bettman said. “Hockey and Glendale and the Valley were star-crossed lovers. Things just kept going wrong in the relationship, whether it was competitiveness or ownership or a whole host of factors.”

The league itself took over the operation of the team four years ago and they saw promise in the franchise then with all the restraints the franchise was under as far as payroll and making ends meet, which Coyotes Chief Operating Officer Mike Nealy did a masterful job at considering what he had to work with.

The onus is now on IceArizona to continue the upward progression the Coyotes were on two years ago when they won the Pacific Division and made it to the Western Conference Finals.

It’s also good that the higher-ups are sold on the Coyotes and their future in Arizona.

“I really believe in this Phoenix marketplace,” Coyotes Chairman and Governor George Gosbee said. “Every one of our partners that came into this deal, that was our sole purpose, is to look at everything from the macro environment down to the product.”

“We feel very comfortable that hockey’s gonna work in this Valley,” Gosbee said. “If not, we wouldn’t be involved.”

Gosbee and the group made it plain to the NHL that they wanted general manager Don Maloney and head coach Dave Tippett involved in every aspect of these proceedings.

“We don’t know how to run a hockey organization,” Gosbee said of their lack of experience in running a sports franchise. “That’s why we have Don Maloney and Dave Tippett. We’re gonna let them do their thing. We’re focused on the business side of it.”

Within the business side of running a sports franchise like the Coyotes, is the matter of payroll. The Coyotes were 29th in the league in payroll last season. In 2011-12, when they made their run to the Western Conference Finals, they ranked 22nd in payroll.

Anthony LeBlanc, Coyotes Alternate Governor and pending CEO, says the team is looking to increase payroll this coming season at a “reasonable level.”

“There’s no question we’d love to spend the way the top market teams do, that’s not just a reality in this market, at least at this particular time,” LeBlanc said. “We need to be smart, we need to be prudent, but at the same time we feel, based off the budgeting that we’ve done preparing for this deal and what we expect to see happen on the business side, we feel confident we’re going to be able to give him [Nealy] the budget that will help the franchise.”

That’s music to Shane Doan’s ears. He was one of the front runners who stepped out and took a leap of faith and returned to the Coyotes last season when he had standing offers in a number of other hockey towns to come play for them.

He believed so much in the Coyotes and what they stood for that he bypassed all that to return to the Valley.

Now that he finally knows who his owners are, he’s breathing a sigh of relief.

“It’s hard to put it into words,” Doan said. “Last year at this time, we were all hoping that it would get done, and to finally have it done and official, I’m so excited.”

“I’m excited about our team, I think we got a great team, and now with this stability, I think not only a team we have now, but going forward, we’ll only get better because it’s such a great place to come [and] play,” Doan said.