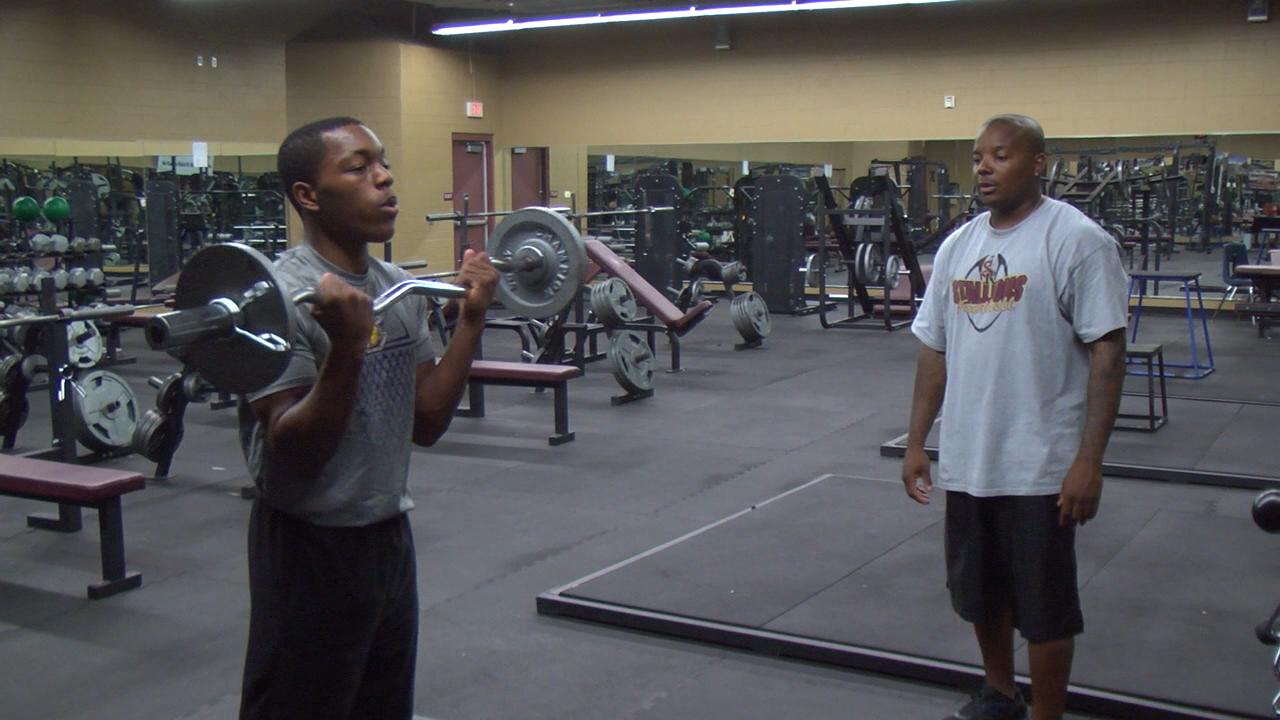 Tyler Gibbs hasn’t earned a roster spot quite yet at NAU, but he’s working his tail off to show himself worthy of one.

Gibbs grew and matured during his four years as point guard at Shadow Ridge High School.

Now, he’s getting himself ready over the summer for what’s to come in Flagstaff, Ariz.

Gibbs got some interest from some other schools like Eastern New Mexico and Pima Community College, and even got an offer from Spire Academy in Geneva, Ohio. But when an opportunity to walk-on and actually try out with the Lumberjacks dropped in his lap, Gibbs immediately jumped at the opportunity.

Gibbs has had August 28th circled on his calendar for quite a long time. That’s the first day of school at NAU, and it’s also the first day for tryouts for the basketball team.

Because he had that date on his mind well ahead of time, it gave him time to get some training in during the summer, so he could come into the tryouts in the best shape he could possibly come in.

Bobo is the JV assistant head football coach at Shadow Ridge. Bobo has been training Gibbs for about a month, getting him ready for the tryouts.

“I met Tyler at the beginning of his varsity year [of] basketball, saw him in the gym shooting around, getting ready for warmups and I took an interest in him,” Bobo said. “I liked his work ethic, so I started working with him, gradually before every practice shooting around, giving him a few pointers here and there and the relationship’s grown from there.”

Gibbs and Bobo hit it hard in the weight room and on the basketball courts at Shadow Ridge. They’re there three or four days a week for two hours plus at a time getting it in.

“We do a lot of weightlifting, benching, leg pressing,” Gibbs said. “We do a lot of curls just to get some upper body strength, because I know when I go to college, it’s gonna be a whole other level from high school.”

Gibbs could be like a lot of other teenagers during the summer: playing video games, or talking on their cell phones or texting all day, but he’s not. His love is basketball and if he wants to continue to stay in love with the game and be in the game, he’s got to put the extra time and work in to do so.

“I know this is going for a good cause, because I know I got to get bigger, stronger, faster and I have to get mentally stronger for the college level,” Gibbs said. “Everything he’s [Coach Bobo] doing is perfect, I love it.”

Once Gibbs takes to the court after some weight room work (which is no joke in itself), Bobo has him work on free throws, ball handling and his overall game, whether it be layups or jump shots. Bobo wants Gibbs to have a complete game before he gets in front of head coach Jack Murphy and his staff.

“Like I told him, ‘We’re not gonna change, we’re just gonna tweak,'” Bobo said. “His overall fundamentals are great. His shooting stance, his work ethic are all great.”

“All we did was just tweak a few things and he’s adapted very well,” Bobo said.

Gibbs already made the trek up the hill to campus and enrolled in classes. While he was up there, he met with Landon Hughey, the team’s director of basketball operations/video. Gibbs said the talk went well.

Overall, Gibbs is excited to potentially be a Lumberjack this coming fall.

“They’re all brothers up there, they’re all for one another,” Gibbs said. “The coaching and all is pretty legit. I’ve never heard one negative thing about the school.”

Bobo thinks the sky’s the limit for Gibbs and what he’ll be able to do with his basketball career.

“They’re [NAU] getting an all around character [driven young man], a gentleman, just a great person,” Bobo said. “The sky is his limit.”

There are some that may say, if there’s any limit to Gibbs’ game, it would be his lack of height. He’s 5’6″ maybe 5’7″ with sneakers. He doesn’t let that bother him, even with his move to the “big boy leagues.”

This is a young man who’s been playing this game since he was two years old when his mother and father set him up with his own basketball court, which he naturally grew out of. He’s played in leagues in the past where he was the shortest player on the court, or the youngest player on the court and still succeeded.

The point is that Gibbs has had many challenges placed before him when it comes to the game of basketball, and he’s conquered them all, and he’s confident this move to college ball will be just another in a long line of challenges mastered.

Gibbs’ dreams don’t just end with him playing college basketball. They extend to a league beyond that: the NBA.

“I believe in myself,” Gibbs said. “If I can just keep working hard, staying in the gym every day, I believe that I can make it to that next level after college ball.”