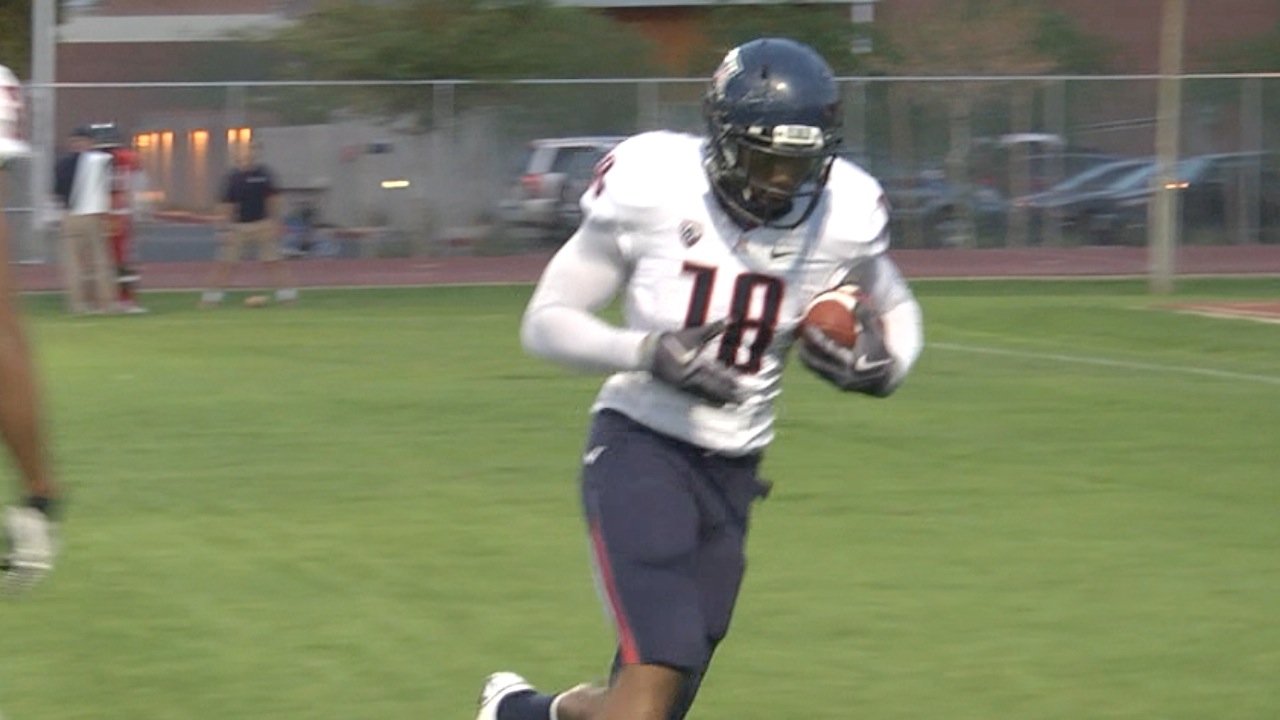 2012 was a frustrating season for Terrence Miller.

After starting the first three games of the season for Arizona, the 6-4 wide receiver was forced to miss the next two games because of a shoulder injury. Then at the halfway point of the season against Stanford, he returned to the lineup only to then sustain and ankle/foot injury which would then sideline him for the rest of the season.

Because of Miller missing so much time, Arizona applied for a medical hardship for him to give him another year of eligibility. The criteria for a football medical hardship, a player must not previously have redshirted before, suffered a season-ending injury, played in no more than four games and not played after the halfway point of the regular season.

Barely, Miller fit that criteria and is back for the 2013 season with a whole new outlook on things after what he had to deal with last season.

“It really made me sad because I wanted to finish the season with the guys I came to school with,” Miller told Pros2Preps.com at Pac-12 media day in Los Angeles. “But I am not looking back on it. I feel fortunate and blessed to be in this position now to get an additional year to play and can go out with a bang this year.”

There was a similar storyline with the Wildcats going into last season with their quarterback Matt Scott. It was different to the sense that Scott did not get injured and be granted another year of eligibility, but similar because it is a player who had to overcome adversity and opted to look ahead to making the most of an extra season.

“I would love to get the same attention that he got and have the same fortunate season that he had,” Miller mentioned. “Matt Scott played outstanding. Hopefully some of that can rub off on me.”

Now looking ahead to 2013, Miller jumps into a very vital role for the Wildcats offense. Dan Buckner graduated and last season’s top receiver Austin Hill blew out his knee in spring practice and will be out for the season. So Miller comes in as the number one targets on the outside for Rich Rodriguez’s offense.

“I have been a leader in the room but I think it is the responsibility of all of the receivers to step it up a level. Maybe even two levels,” Miller explained. “Losing a guy like that (Austin Hill) definitely leaves a big gap. So I have to step up, some of the younger guys need to step up and it has shown so far.”

While the wide receivers are stepping up to fill in for the injured Hill, there are many players in the running at quarterback to take over for Matt Scott. B.J. Denker was the backup last season, Jesse Scroggins transferred into the program and incoming freshman Anu Solomon has his sights on playing right away. The decision on who will start will be a big storyline during fall camp and Miller has seen positives with all of them.

“I have seen a lot of leadership out of all those guys,” Miller stated. “Anu being a young guy but he has leadership qualities. And Jesse and B.J. and some of the older guys do a great job managing the other quarterbacks and the whole team for that matter.”

“They have definitely jumped into that Matt Scott role,” he added. “It’s going to be hard for them to step into his shoes like it was hard for him to step into Nick’s (Foles) shoes but I feel like those guys can do it.”

Terrence Miller finally gears up for his final season with the Wildcats for fall camp starting Saturday, August 3rd.