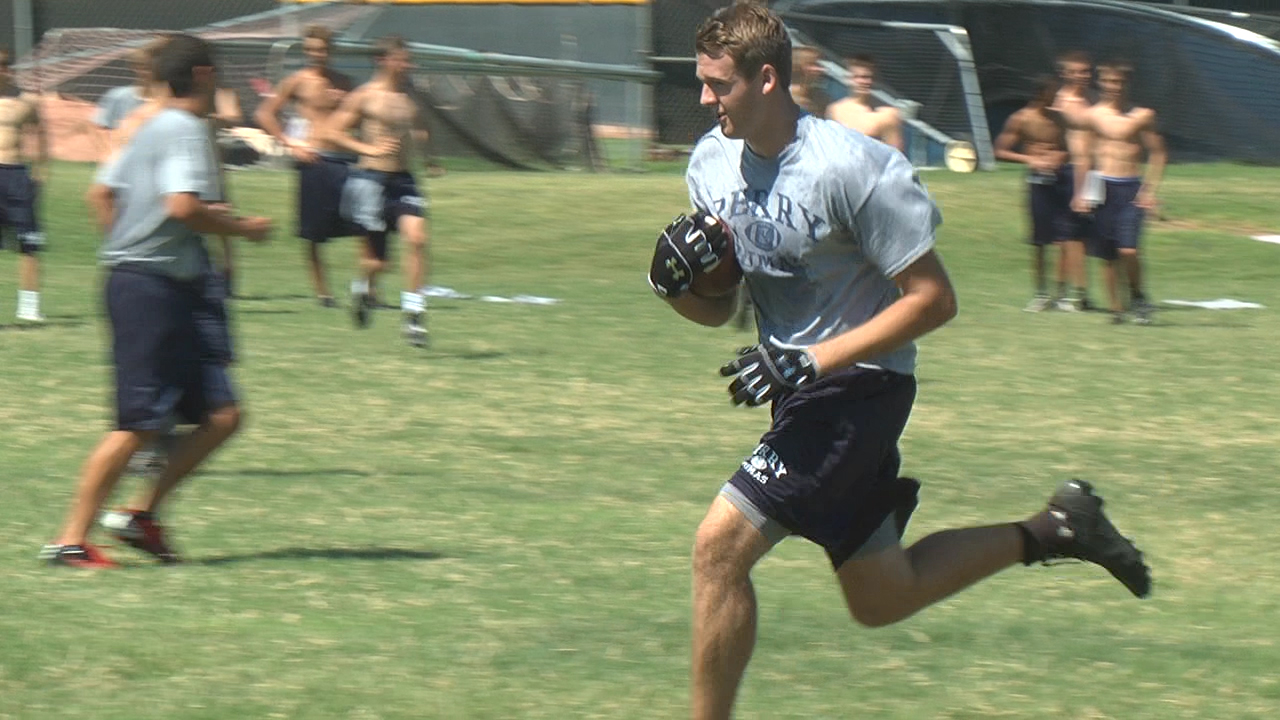 Perry’s Lane Veach hasn’t played much outside linebacker for the Pumas. This coming season will be his first full season manning the position, alongside his duties at tight end.

Veach will need to learn fast this season, because come next season, he’ll be deep into it as a member of the Stanford Cardinal.

Recently, Veach committed to head coach David Shaw and the Cardinal. It was kind of a weird way in which it all went down for him, as the recruiting process for him and various schools really didn’t jump off until May. That’s when schools started knocking down his door and Puma head coach Preston Jones’ door as well wanting to get a peek at him.

“I think it was just word of mouth,” Veach said when talking about the quick explosion of interest coming in his direction. “I only played five games [in] my junior year, because I broke my hand [in] a scrimmage. I just think people started hearing about me and my height and how I could move and get low. I think it just took off after that.”

Cardinal outside linebackers coach Lance Anderson paid Veach a visit during a volleyball game last year just to check him out and see how he could move. Defensive coordinator Derek Mason followed that visit up with one of his own, which showed that the Cardinal were clearly interested in what Veach had to offer.

Veach then went out to one of Stanford’s camps in Palo Alto, Calif., and performed well enough for Shaw to meet with him one-on-one in order to extend him an offer.

“He [Shaw] said that they’d love to have me on the team, that they really liked my size and the way I could move for my size,” Veach said.

And the rest, as they say, is history.

When Veach walks into a room or onto a football field, you know he’s in the vicinity. He’s not hard to spot being as tall as he is.

Combine that with his agility, and he feels like he has just what Stanford needs in an outside linebacker.

“I’m a quiet leader, I’m not a vocal leader, but I lead by example,” Veach said. “I think that’s one of my assets as well.”

Unlike what Veach does at Perry, splitting time between tight end and outside linebacker, he’ll be strictly on defense for Stanford, as a hybrid outside linebacker/defensive end, like former Brophy Prep standout Trent Murphy and how he’s playing the position right now at Stanford.

Veach is going to take every bit of time he can this season to work on getting better at the linebacker position, something Jones will go out of his way to help him with.

“He doesn’t have a lot of experience on the defensive side of the ball, so he needs to understand basic concepts of coverages, his alignments, things a lot of times we’re teaching juniors who are just coming up from JV football,” Jones said. “Those are the things we gotta make sure he has down, not only for us, but to help him at the next level as well.”

As much as any coach or coaches can try and pound so much football into a player, there are just some things that come naturally to a kid.

“He [Veach] has a seven-foot wingspan,” Jones said. “You can’t coach his height, you can’t coach his wingspan. He’s just scratched the surface on what he’s gonna do defensively, and he’s a great offensive threat for us as well.”

Puma quarterback Austin Nightingale absolutely loves Veach and his wingspan, which allows Veach to catch “every single ball” he throws to him.

Nightingale likes the potential that Veach possesses as well on the defensive side of the ball.

“Our scout offense coach won’t even throw to his side because he knows it’s gonna get picked off,” Nightingale said.

Veach towers over most at 6’6″, but neither his height nor his acceptance into a Pac-12 institution like Stanford University will change who he is as a person.

“He’s not some big-headed guy who thinks, ‘Oh, I’m going to D-1 so I’m better than everyone,'” Nightingale said. “He’s not like that, he’s just an amazing young man.”