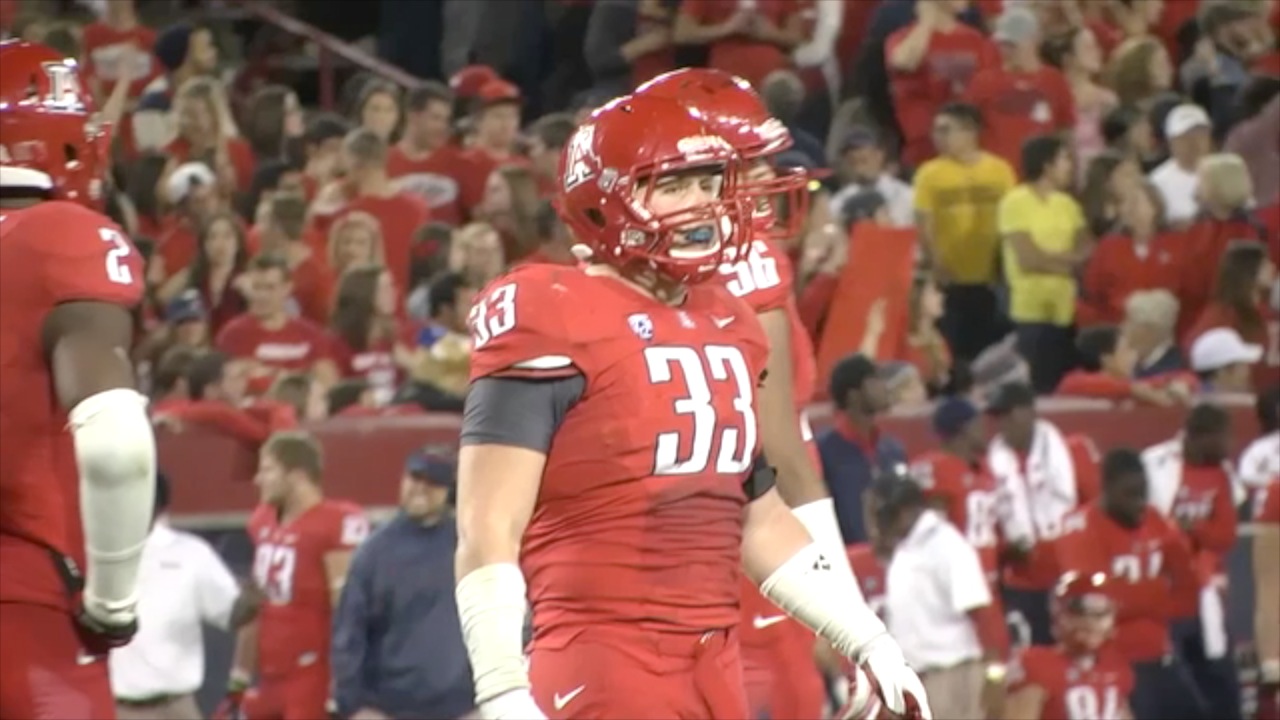 Arizona senior linebacker Jake Fischer made headlines this summer after adding his name to the Ed O’Bannon lawsuit against the NCAA and EA Sports.

He was constantly asked about that at Pac-12 media from Los Angeles on friday.

But when it came down to talking about football, Fischer made more headlines.

“Honestly I think we are going to be one of, if not the best defensive units in the Pac,” Fischer stated to Pros2Preps.com.

Now the senior from Tucson, Arizona is coming off a great season for the Wildcats in 2012 leading the team with 119 tackles. But the defense as a collective unit struggled. They allowed a great number of points, yards and often times had a lot of trouble getting off the field.

But going into 2013, Fischer clearly has a lot of confidence in what his defensive will be capable of.

“We definitely had a couple players that had to step up (in 2012) that we know we are going to be able to count on this year,” Fischer said. “Some of the guys last year might not have been ready to step in physically and mentally at such a high level. All of those guys are back and they are all better than they were last year.”

A main reason why the Wildcats expect to be better than last year is because they are now much more familiar with the new coaching staff under Rich Rodriguez. For Fischer and the defense specifically, they further understand how to be successful playing for defensive coordinator Jeff Casteel going into year two.

“We all know what to expect and we all know how we need to play in order to win,” he mentioned. “A year under coach Casteel’s defense is a huge positive to take away just because we know what we are doing, we are getting good at what we are doing and we have more people to come in now when someone does get injured.”

“It’s all going to come down to the fact that we have depth now and we have confidence in what we are doing,” Fischer added. “We know how to win, we just have to go out there and prove it now.”

Lack of depth and injuries was one of the main hindrances for Arizona’s defense in 2012. A lot of players in 2013 will be back coming off injuries on both sides of the football that sidelined them for a considerable amount of time.

Fischer understands that frustration as much as anyone. He missed the entire 2011 season after tearing his ACL during spring practice. He sat on the sidelines and watched his team go 4-8. What he was able to learn in that time is now aiding others that are now facing the same adversity. It is his leadership from how he handled himself both on and off the field from not playing one year, to be one of the conferences leading tacklers that has players eager to follow his example.

“You cant take any plays for granted,” he explained. “A lot of guys don’t realize that until they cant be out there playing or they have to sit out because of injury…It teaches you how much you love the game of football. So I tell them not for take anything for granted and to got all out.”

Fischer and the Wildcats report for fall camp to officially begin the 2013 football season on July 3rd.