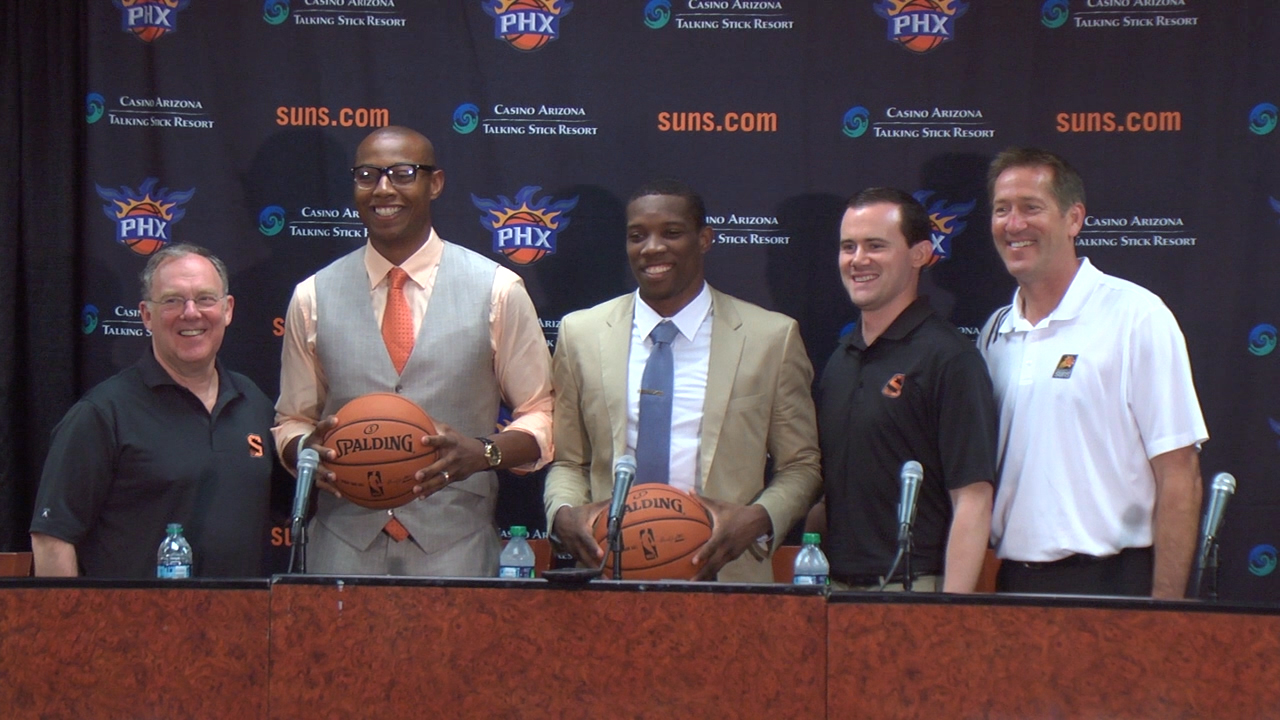 Eric Bledsoe and Caron Butler arrived to U.S. Airways Center on Thursday for their first session in front of the media since being dealt to the Suns from the Los Angeles Clippers as part of a three-team trade.

There’s a lot of excitement within the Suns organization about what Bledsoe and Butler bring separately and collectively to the team.

Bledsoe brings youth, energy and explosive play in the backcourt, while Butler’s known for getting the ball in the basket and for his wisdom and experience in the game of basketball.

Suns general manager Ryan McDonough has been hard on the heels of both of these young men, going back to his days with the Celtics.

His hard charging attitude in the pursuit of them finally paid off: he’s got them on his team now.

“They’re both exactly the kind of players we want to bring here to Phoenix,” McDonough said. “They’re gonna play an up-tempo style of basketball, they’re tough guys, they’re hard workers, they’re team first guys and we’re thrilled to have both of them.”

“From the coaches side of it, and part of Ryan, what he’s always talked about is we’re going to get the best players possible, somehow, some way,” head coach Jeff Hornacek said. “Whether it takes one year, two years, we’re gonna get them here.”

Hornacek feels that McDonough and the rest of the Suns front office set him up well by dropping Bledsoe and Butler in his lap.

“I thought they did a great job getting these two guys in here, because both [of] these guys are professional, great players,” Hornacek said. “As a coach, I’m envisioning Eric and Goran [Dragic] pushing the ball up the court, creating those 4-on-3, 3-on-2 opportunities. Caron’s knocking down threes and jumpshots and out bigs are rolling to the basket.”

The Suns will be Butler’s sixth team. He’s heading toward his 700th career start in the league, which he’ll obviously eclipse early in the season, barring any injuries. He’ll be the most tenured of any Sun on the roster, as he heads into his 12th NBA season.

Playing with this group of players won’t be any different to Butler. He said he’ll continue to do what he’s always done: be a mentor to whomever needs him.

“[I’ll] be setting the example on and off the court, arriving to practice early, leaving late, talking to guys about basketball, about life, family, everything,” Butler said. “Keeping the guys determined and dedicated and disciplined throughout the process. Just being a big brother and a shoulder they can lean on, and a extension of Coach [Hornacek].”

Butler said he wants to be a part of a “winning culture” in Phoenix with the Suns, so he said he’s going to whatever it takes to instill that winning mentality in the locker room.

Being sought after and wanted by McDonough was “flattering” to Butler, which also made the decision to come to the Valley of the Sun that much easier knowing one of the main men making decisions for this team had him on his radar for all this time.

“Once I found that out, I was extremely excited about coming here,” Butler said. “He told me that he’d been following me for years and the expectations and what he expected out of me, and I was definitely ready for that challenge.”

“I train hard in the offseason, and there’s certain things I want to be able to show and display out there on the court, so I’m definitely gonna have the opportunity here,” Butler said.

Speaking of opportunity…Bledsoe played behind one of the top guards in all the NBA last season in Chris Paul, so chances for him to showcase his skills weren’t exactly falling out of the sky for him.

When Bledsoe did get the opportunity to show what he could do, he made the best of it, which made him a well sought after commodity once Paul signed a max contract with the Clippers, which pretty much made Bledsoe’s decision that much easier: stay and backup Paul for however many years, or hit the market and find another team.

That another team was the Suns, which he’ll definitely get a chance to make an impact on from Day One.

“It’s definitely a plus for me,” Bledsoe said of the opportunity given him in Phoenix. “Now Ryan’s got confidence in me, I got full confidence in myself to help Caron make some big things happen here. It’s a blessing.”

Bledsoe’s future, to him, was a little bit cloudy. He thought he might have ended up with the Orlando Magic, but wasn’t 100% sure of that.

Then the deal came that sent him to the Suns, and an opportunity to team up with Dragic in the backcourt. It’s something he’s very much looking forward to.

Hornacek wants his team to be fast and run an up-tempo style of basketball. Those are a few things that are right up Bledsoe’s alley.

“It fits in great, especially if you know me,” Bledsoe said. “I’m a real transition type of guy. It’ll make it a lot easier having Dragic, who can also control the game too.”

Some may say Butler’s heading toward the twilight portion of his career. Some may say he’s already there. One thing’s for certain is that Butler has been where Bledsoe’s at right now in his career, and he sees nothing but potential and success coming the 23-year-old’s way.

“An explosive, dynamic guard who has superstar written all over him,” Butler said. “Him doing more than holding his own in practice and showing flashes throughout the duration of those two years, which made him a hot commodity.”