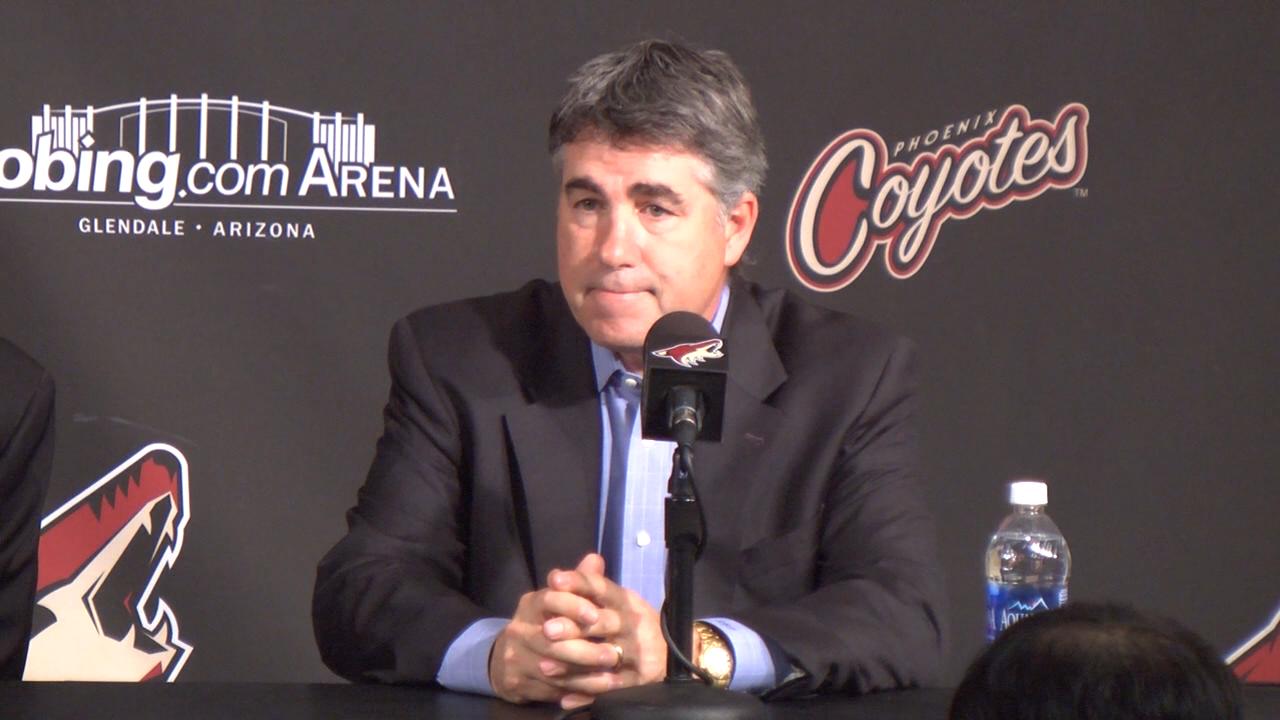 It was imperative that the Phoenix Coyotes remained Dave Tippett’s employer. Otherwise, there were a number of NHL teams that were lined up to make him their next head coach.

The team doesn’t have to worry about that because Tippett made his choice: he wants to be the head coach of this franchise, so he signed a long-term extension on Friday.

Tippett is 156-96-42 in his four years with the Coyotes. His .602 winning percentage is tops among any coach in franchise history.

Even with the uncertainty surrounding the franchise and whether or not they’ll be in Glendale, Ariz., for the foreseeable future, Tippett decided to stay with the Coyotes, primarily because of what he saw general manager Don Maloney and assistant general manager Brad Treliving do: take a leap of faith and also sign long-term deals.

“I just felt like this was the best fit, because of the people you get to work with,” Tippett said. “We all have a similar vision of how we’d like to build this team.”

“There’s some challenges ahead, but it’s about taking it to the next level,” Tippett added.

The city of Glendale is scheduled to hold a city council meeting to potentially approve a sale on June 25. Renaissance Sports and Entertainment is the most recent ownership group that’s stepped up and is looking to buy the team and keep it in Arizona.

If both sides can come to a new lease agreement, then the Coyotes stay. If not, then the city of Seattle – with the help of investors Ray Bartoszek and Anthony Lanza – could be the next landing spot for the team.

Tippett just wants his team on a “level playing field,” for the first time in a very long time. He loves it here in Arizona. He’s built something very solid with this organization, and he just wants this situation taken care of so everyone can get to the matter at hand, which is making this team the best it can be.

“When you talk to a free agent, or the free agents we have here, that you’re talking about, ‘This is where we’re gonna be,’ and the stability is in place,” Tippett said. “We’ve had some good players that we wanted to keep, or would like to bring here. Everyone’s on board, they love it, expect ‘Are you gonna be there for a long time?'”

“If we can get that stuff out of the way, it puts us on a level playing field with everyone else,” Tippett said.

This franchise has been challenged ever since it relocated to Arizona back in 1996, and it’s made it through. Having Tippett back at the helm is step in the right direction according to Maloney.

“I always felt fairly certain that we could make a deal,” Maloney said. “I think he took less money to stay here, like Shane Doan, which is part of that commitment to stay with this group.”

“This [signing Tippett] was maybe THE most important decision all off-season as far as I was concerned,” Maloney said.

With the ownership cloud looming over the Coyotes, getting top notch free agents to come to the Coyotes isn’t going to be easy. It’s going to be a struggle until it’s put in stone where the team will rest it’s hat, whether in Glendale, or possibly in Seattle, Wash.

However, having Tippett back running things, and knowing that the front office is set as well, should begin to sway those free agents who put up a force field between them and the Coyotes.

“It’s good to have Tip back on board and in place,” Maloney said. “There’s no more uncertainty of how we’re going to operate this franchise.”