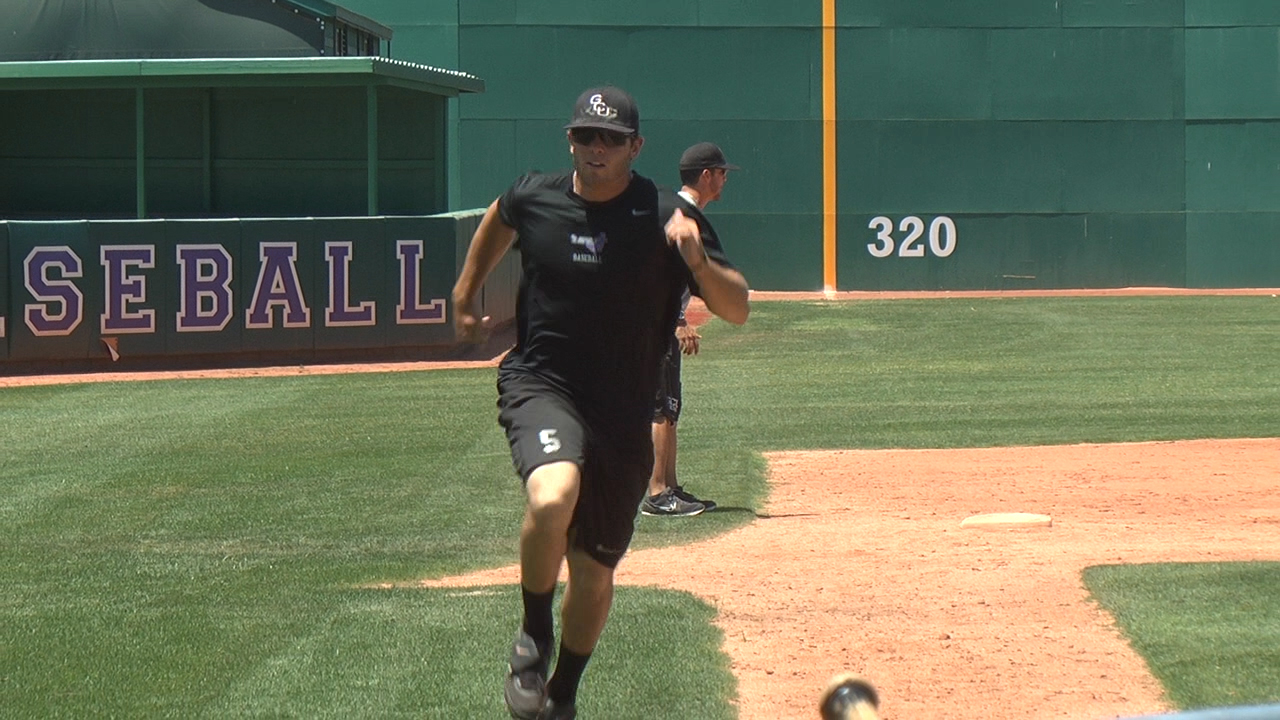 If you Google the words ‘grit’ and ‘determination,’ you’re sure to see a picture of the Grand Canyon baseball team right alongside those words, because that’s what they were full of over the weekend at the Division II West Regional in St. George, Utah.

They played a total of six games between last Thursday and Sunday – the last three all being elimination games – and somehow, they found a way out of Utah as West Regional Champions.

Now they have their sights and minds collectively set on the final challenge of the year: heading to Cary, N.C., to take part in the Division II Baseball Championships, which for them, start on Sunday. They’ll take on St. Edward’s, the winner of the South Central Region.

The game will start at 2 p.m. Arizona time.

“To go 5-1 in the West Region, it’s hard to do,” head coach Andy Stankiewicz said. “To play well in those games, it makes you kind of push your chest out and be very proud of your guys, and we’re proud of the way they went about it.”

Grand Canyon had to win twice on Sunday against Chico State just to get to the Championships, and that’s no easy feat like Stankiewicz said, but the guys hung tough despite being completely exhausted, as some of them told me at practice on Tuesday.

You’d expect them to be worn out after playing six games in just a few days with every successive game being bigger than the former.

“The guys just refused to walk away,” Stankiewicz said. “They were like ‘No, no, it’s not our time, it’s not gonna happen now.’”

“We’ve talked about getting to the College World Series and how important it [is] to these guys and our program and to make a bold statement, that Grand Canyon baseball is headed in the right direction.”

The talk of getting to Cary, N.C., didn’t start as the season was coming to a close. It started all the way back in preseason, when Stankiewicz posted a picture of the city of Cary and pictures of the baseball field on the team’s bulletin board.

“I don’t know how many of us really thought it was that realistic, but we never really had a doubt through the whole season,” shortstop Paul Panaccione said. “We hit that 20-game winning streak, and we rolled through the playoffs and we’re staying hot right now.”

“I think we got a good shot at this,” Panaccione said.

Panaccione’s one of the newbies on the team –a freshman – but he doesn’t play like one. He had his struggles early on in the season, but rounded into form when the team needed him, like this past weekend for example. Panaccione had eight RBI during the Regional, and all eight of them were game winners.

“Everytime I went to the plate, I wanted to go with a positive mindset [and] have the right approach,” Panaccione said. “I was hitting in good counts all week, [and] I wanted to stay calm and get the job done and I did it.”

Panaccione said despite being on the brink of elimination in three straight games, the team never panicked. He said they continued to have fun in the dugout and in the clubhouse, just like they’ve done all season long.

“That surprised me a lot,” Panaccione said. “Everyone was calm, we never stressed about having our last game or anything.”

“I’m glad we did this for the seniors too,” Panaccione said. “Not only is it my last chance in the playoffs, but it’s their last chance to play college baseball, ever.”

When I asked Panaccione if he knew anything about St. Edward’s, he said no, and he prefers it that way, not knowing much about the next opponent.

“I like not knowing who we got to face, they don’t know us, we don’t know them,” Panaccione said. “We’ll just be playing baseball.”

Jorge Perez was one of the many Lopes who stepped up and played strong when it came down to it. Perez pitched a complete game – his second of the season – against Sonoma State on Friday night. He then pitched in Game Two against Chico State on Sunday and got his first career save, and what better time to get it if you’re Perez.

“It was just so surreal, I couldn’t believe it,” Perez said when reflecting back on getting the final Chico State batter out via strikeout.

Perez had the batter 0-2, and he threw him a slider to punch him out – a pitch Perez has complete confidence in.

“I felt like he had no chance,” Perez said. “I had that much confidence I was gonna strike him out and we were gonna go to the College World Series.”

“I just felt a relief, like if you accomplished something great,” Perez said. “It was so much fun watching my teammates running after me and tackling me. It was definitely something I’ll never forget, it was amazing.”

No rest for the weary, as the Lopes will jump on a plane on Thursday and head east to hopefully complete their journey and return home as Division II National Champions.

“It’s be really rewarding to bring a national title back to the state of Arizona and to Grand Canyon [University],” Stankiewicz said.

“We’re one of eight teams in it, so trust me, we’ll get there and we’re gonna let it fly,” Stankiewicz added.