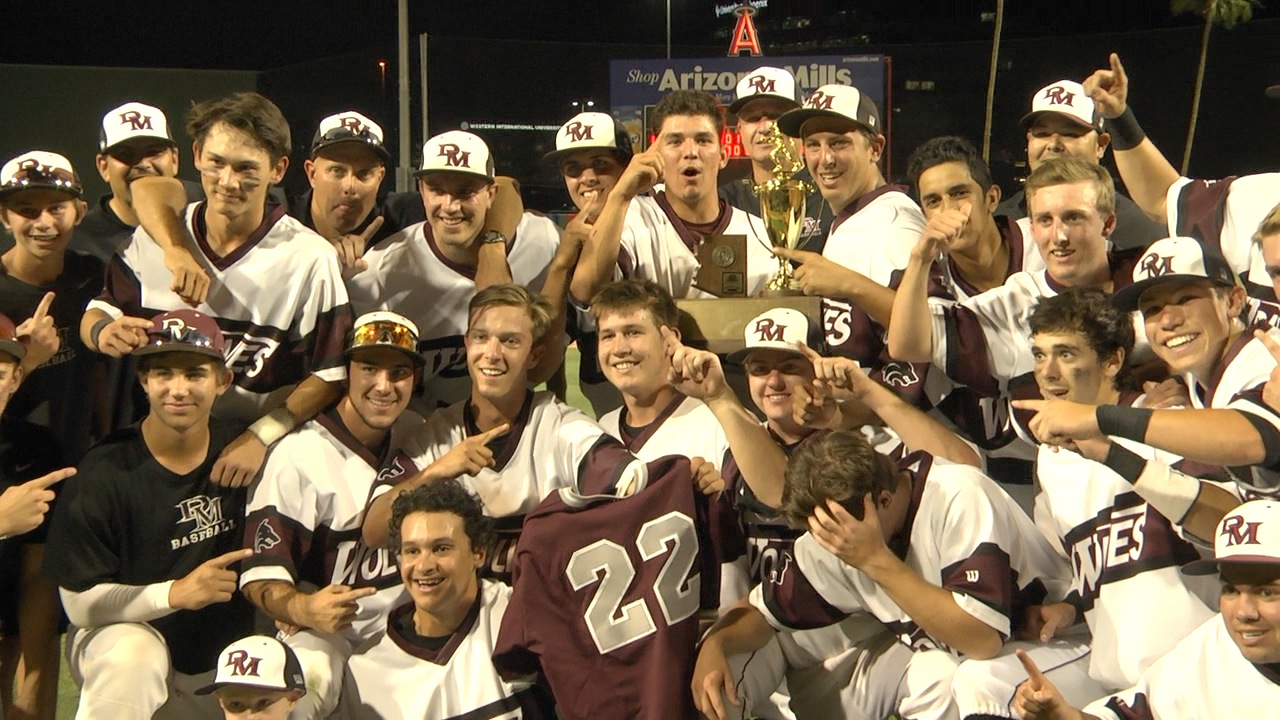 It did not seem like long ago that Chaparral was at bat in the bottom half of a tied game in the seventh inning with Brophy when Dylan Cozens for Chaparral hit a walk-off home run to make the Firebirds the 2012 baseball state champions in division I.

The 2013 division I state title game had just as much drama as it took eight innings to find a winner this time. Unfortunately for Chaparral, this time they found themselves on the wrong side of a walk-off hit. Senior David Greer stepped up to the plate with a runner on second and laced a ground ball past the first baseman to score fellow senior Michael Salazar for the 4-3 win.

“I really just wanted to make contact, that was the biggest thing for me,” said Greer after the game. “Bigcrane is a great pitcher, I knew that. I’ve faced him many times in my career. Just had to make contact and see where it went.”

“These kids, they deserve this,” said Desert Mountain head coach Brian Stephenson. “This is 100% about those guys, those 17 kids that are in that dugout. I am proud of them and they accomplished something extremely special tonight.”

The Wolves came out fast. After Chaparral put a run up on the board in the top of the first, they responded in the bottom half with three runs of their own, knocking Chaparral starting pitcher Kyle Palmer out of the game after just 0.2 innings.

Chaparral would battle back throughout the game as they have done through their entire tournament run. In the 2012 championship game, then junior Dillon Bigcrane came in and pitched masterfully in long relief to put the Firebirds in position to win it. In 2013, the senior Bigcrane came up just as big and was a magician for the the birds in relief as he came in to get the last out in the first and did not surrender another run until the walk-off hit by Greer in the bottom of the 8th. The stretch of scoreless innings allowed Chaparral to eventually tie the game and send it into extra innings.

“It was just a great effort that he put forth tonight,” said Chaparral head coach Sam Messina of Dillon Bigcrane after the game. “You know he is capable of those things…he felt good tonight and did a great job for us.”

Desert Mountain got very solid pitching as well. Cody Erickson has been their ace all season long. Though he did not have his best performance of the season, he was the emotional leader of the Wolves throughout the game and pitched six strong innings before giving the ball up to David Greer in the seventh.

Greer then pitched two lighting innings, throwing just 20 pitches and 19 of them were for strike. Greer said after the game the he has been clocked at 92 miles per hour before but with the adrenalin he had for the big game, he wouldn’t be surprised if he threw a little harder than that.

“I just really knew we were going to take this win,” mentioned Greer. “We have been playing together for four years and we’re really a family. We’re closer than a lot of other teams, I knew that. I just knew once we were out there, we had it.”

For the Wolves, it is their first ever state championship win after coming up short in 2007 and 2010.

Check out video highlights from the game: