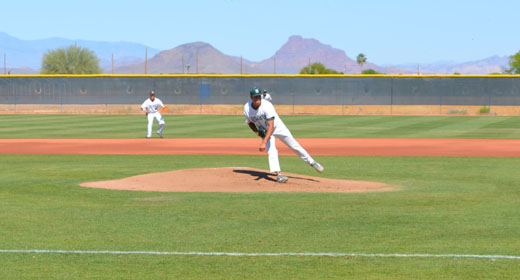 Sebastian Kessay is a sophomore starting pitcher for the Scottsdale Community College Fighting Artichokes. Some might say Sebastian’s last name should be pronounced “K-say” for his ability to strike out opponents.

Kessay is a graduate of Blue Ridge High School in Arizona’s White Mountains where he put together a solid 14-2 record as a two-year starter and notched nearly 180 strikeouts. His senior year was as close to perfect as you might expect for a pitcher living in an area where baseball is only played four months out of the year. Kessay went 12-0 and struck out 149 batters with a 1.21 ERA in 71 innings. He had one game where he struck out 19 and another where he put down 18 as a senior Yellow Jacket hurler.

It was an adjustment in climate from the often cold White Mountains compared to the Valley.

“It is a lot easier to get warm down here and I find it is easier to prepare my game plan,” he said. “At Blue Ridge a lot of my throwing sessions took place in the gym. Here all of my throwing is done outside. It has helped me get tuned up that much faster.”

He is a White Mountain Apache and a stoic left handed technician on the mound.

“I really worked on my mechanics this year,” he said. “I came out committed to get better this fall. I had to improve my location.”

“Sea Bass”, as his Artichoke teammates affectionately call him, staying commited to getting better is paying off. He has a record of 3-1 with 71 strikeouts over 55.2 innings and an ERA of 0.81. The Artichokes are currently in 5th place overall in the Arizona Community College Conference standings with a 21-12 record.

Sebastian’s future in baseball looks pretty bright he has offers to play for the Northwood University Knights in Cedar Hill, Texas and Southeastern University in Lakeland, Florida.