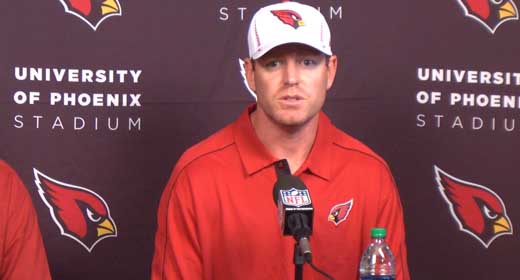 The quarterbacking situation for the Arizona Cardinals
hasn’t been quite the same since Kurt Warner retired a few years
back. In fact, since Warner’s exit, the Cardinals have had seven
different men man that position, and the results haven’t been very
good. In comes Carson Palmer to save the day, Cardinals fans are
hoping. Warner was 38 years old when he walked away from the game.
He seemed to be in great shape, both physically and mentally at
before his shocking exit. Palmer is 33 years old right now. He,
like Warner, looks to be in great condition as he heads into his
10th season. The comparisons between the two were going to come
over time. Both men joined the Cardinals on the backend of their
careers and were/are expected to do big things for the team. “It’s
so hard to compare quarterbacks, period,” Palmer said. “I know I
have a lot of tread left on my tires. I know my body very well.
I’ve taken very good care of if over the years and know what I have
left.” “Kurt was in a different stage of his career, and it’s hard
to make those comparisons,” Palmer said. “He came here and just lit
people up. I’d love to be compared to some of the things he did
here when it’s my time to leave.” With the talent the Cardinals
have in-house, Palmer thinks the team has a great shot at making a
run at the Super Bowl this year. “I obviously know a lot about this
team and have watched them a bunch on film, just like you watch and
you notice every team,” Palmer said. “I saw a handful of games that
Michael Floyd played in at the end of the year and saw the
potential there, and obviously Larry [Fitzgerald].” The offensive
line struggled out of the gate last season, but seemed to get
stronger as the season went on. Head coach Bruce Arians has worked
with some of the best quarterbacks to ever play in the league [Ben
Roethlisberger, Peyton Manning, Andrew Luck], so Palmer knows he’s
in good hands with Arians and assistant head coach Tom Moore.
“Their experience in the NFL has been to protect the quarterback
and let him step into throws and make plays downfield and give guys
opportunities to make plays on the ball in the passing game,”
Palmer said. “We’re going to get to work, we’re going to grind, and
we’re going to get better.”