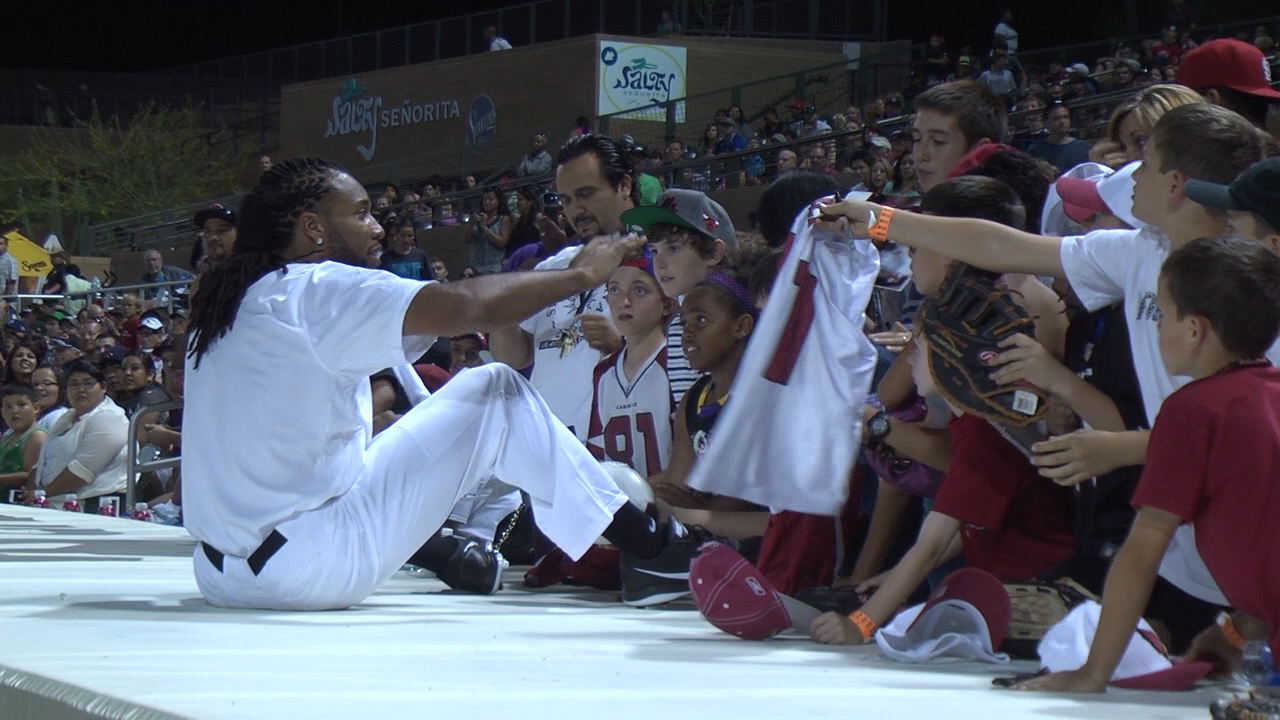 It’s amazing how Larry Fitzgerald finds time to have a personal life, let alone have time to focus on football and focus on others.

Somehow he found a way to do the latter on Saturday, as he hosted the third annual Larry Fitzgerald Double Play Celebrity Softball Game at Salt River Fields.

The stadium was completely full for the event, with all proceeds going toward The First Down Fund, whose mission it is to make sure children and their families live fruitful and prosperous lives.

The First Down Fund supports many programs and institutions, not only in Arizona, but across the country.

If you’re wondering who won the game, it was the Red Team.

It really didn’t matter who won the game, as long as everyone had a fun time, and a good number of kids and their families are also being blessed as a result.

“It’s humbling to see the support,” Fitzgerald said. “5,000 people showing up to a charity softball event. There’s a lot of things to do in the Valley, but they decided to come here.”

“It means a lot to me, and I promise you I’ll continue to do good works in this community,” Fitzgerald said.

Fitzgerald’s former quarterback Kurt Warner was on the opposing team, which didn’t diminish their love and friendship one bit.

Warner didn’t hesitate to come out in support of his friend, because Fitzgerald would be one of the first to say yes to each and every event Warner and his foundations put on.

“Just one of the young guys that get it, that understand they have an amazing platform and an amazing opportunity to impact a lot of people’s lives,” Warner said when speaking on Fitzgerald. “Not very many young guys are able to understand that as early as Larry did.”

“That’s the fun thing, to watch how he’s grown over the years, and every year going, ‘Okay, what else can we do, how else can we impact people?'” Warner said. “It’s a pleasure to come out and support what he’s doing.”

The winning trend with the Cardinals continued with defensive end Darnell Dockett, who teamed up with Warner and the rest of the Red Team on Saturday night.

Dockett and Fitzgerald were both selected by Arizona in the 2004 NFL Draft, and have been rolling together ever since.

Dockett said even if he told Fitzgerald he had a previous engagement, Fitzgerald would still find a way to spin it so Dockett would come and participate in the game, because that’s how influential Fitzgerald is in his life.

“Nothing surprises me with his events and everything he does to give back to the community,” Dockett said. “Just a good teammate, a good person [and he’s] in a good place to help everyone.”