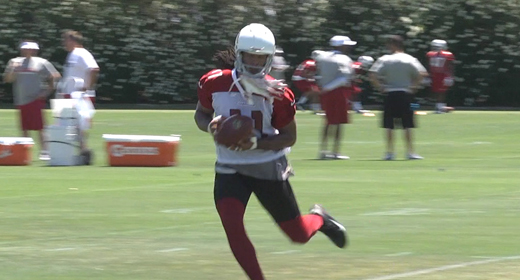 In many ways the 2012 season was one to forget for Cardinals perennial Pro-Bowler Larry Fitzgerald and the millions of people living vicariously through Fitz in the world of fantasy football.

Most arm-chair quarterbacks felt Fitzgerald’s pain and frustration as the Cardinals struggled to find consistency under center. He caught 71 balls for 798 yards and just four touchdowns. He accumulated 1,411 yards and eight scores in 2011.

With Carson Palmer now in the fold as the team’s new starting quarterback expect those problems to end.

“Larry is going right back into the top 10, without question,” NFL Network Fantasy Editor Michael Fabiano told Brad Cesmat recently on ‘Big Guy on Sports.’ “I have him ranked in my top eight…I don’t see him getting past the second round. I think Larry’s back and has a big season in 2013.”

He believes others to keep tabs on as training camp unfolds this summer are new running back Rashard Mendenhall (possibly to draft as a flex player) and wide receiver Andre Roberts who’s 2012 numbers mirrored Fitzgerald’s.

“The Cardinals from a fantasy perspective are certainly a team on the rise,” Fabiano explained to Cesmat. “Last year their best player [Fitzgerald] was basically negated by poor quarterback play and a poor offensive line.”

Fabiano believes Texans running back Arian Foster will be his number one overall fantasy pick this fall. It’s close between Foster and Adrian Peterson but his schedule is the second-toughest among running backs, while Foster’s is the second-easiest.

As for the just completed draft Fabiano has Steelers running back Le’Veon Bell and Denver’s Montee Ball atop his rookie depth chart for all offensive players. He notes the bruising Bell fits Pittsburgh’s ‘ground and pound’ offensive philosophy, while Ball could start and get the majority of the touches if Willis McGahee is released like some have speculated. Both Bell and Ball have nice pass-catching abilities, as well.