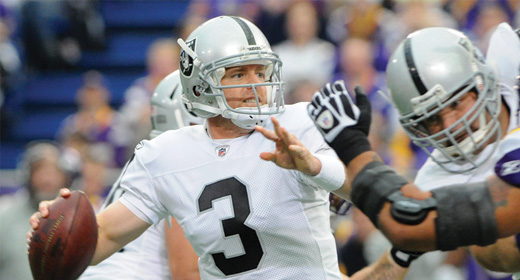 The Cardinals are on the verge of adding yet another quarterback to their roster.

Arizona is currently working on a deal to bring Raiders quarterback Carson Palmer to the team.

From all accounts, the Cardinals are willing to give up at least one mid-to-late round pick for Palmer.

The Cardinals have two picks in the sixth round, so it’s possible they give up one of those in the deal.

As far as what Palmer would make, Mike Garafolo of USA Today is reporting that the Cardinals would pay Palmer around $8 million for the coming season.

Jason LaCanfora of CBSSports.com tweeted earlier on Monday that he thinks John Skelton would be the odd man out if and when this move for Palmer is made.

Hoyer’s future isn’t set in stone either. The team could try and move him. Right now, Hoyer’s a restricted free agent. He was given a second round tender by the team, meaning they can match any offer given to Hoyer, or receive a 2013 second round pick in return.

By getting Palmer, the Cardinals would have a proven starter at quarterback. In his nine years in the NFL, Palmer’s started 121 games.

Palmer would also seem to be the right man for the vertical passing system that head coach Bruce Arians is implementing this season.

Compare those numbers to what the Cardinals four quarterbacks – Kevin Kolb, Skelton, Lindley, Hoyer – put up last season, and it shows why this seems to be the right move for the team.

Just as important as the numbers is the veteran presence Palmer would provide for the Cardinals at that position. Depending on what the Cardinals decide to do behind Palmer, he would be a calming influence on the younger quarterbacks.

If Arizona can address the offensive line through the draft, get a healthy Levi Brown back this season, and see even more improvement in tackles Bobby Massie and Nate Potter, then that would give Palmer what he needs in front of him to get the job done.