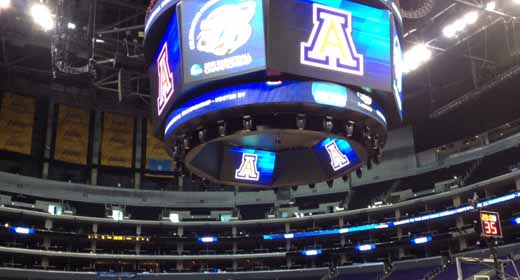 Below are some of the best quotes from Wednesday’s University of Arizona-Ohio State press conference from Staples Center here in Los Angeles.

Arizona head coach Sean Miller on what concerns him most about Ohio State: “I watch Ohio State a lot. I think they’re a remarkable defensive team…it’s not like they’re a bad team on offense. I think they’re really good. They play together at both ends of the floor. [Point guard] Aaron Craft is exceptional at what he does. [Forward] Deshaun Thomas is equally exceptional at what he does, and they have a lot of good basketball players that play Ohio State basketball.”

Ohio State head coach Thad Matta on what he and longtime friend Miller talked about when they saw each other Wednesday: “We were kinda talking about his son who is a huge Ohio State fan and wants to go to Ohio State. He’s a junior in high school and the possibilities of him being a manager for us, so that was kind of the gist of it…I called him last week and said if his son does come, he could stay in my basement and save on room and board because of his [$25,000] fine [at the Pac-12 Tournament]…just trying to help him out a little bit [smiling].”

Miller on the West Regional being referred to as the worst of the four: “If it’s the worst regional, good, great [smiling]. I’m glad I’m here…I don’t think you can worry about who you’re playing, how you got here. We’re in the Sweet 16. If this region isn’t strong, thank goodness. I’m glad we’re here.”

Matta on how Miller was as a roommate: “Sloppy, sloppy. Yeah, the thing about Sean that I’ve learned over time is whenever we’d go somewhere, he’d forget his wallet. We were flying down to Miami many years ago…he shows up [at the airport] and says you’re not going to believe this. I foot my wallet. You’re going to have to pay for everything and he was making a lot more money than I was at the time.”

Arizona senior forward and LA native Solomon Hill asked if growing up he thought a lot about playing at Staples Center: “Not really. I watched a lot of games on TV. I wasn’t a huge fan of the Lakers. But it’s a little different. As you get older, you start to understand the magnitude of games when you play inside a building like the Staples Center.”

Craft on if he ever goes on social media or blogs to see what people are saying about him: “I actually don’t have Twitter so I like to avoid all of that. There was a Chuck Norris one the other day that was pretty funny from a former teammate. I believe it said that I would kick Chuck Norris’s butt and then he would shave his head to look more like me. I thought that was pretty funny…gave me a good laugh.”