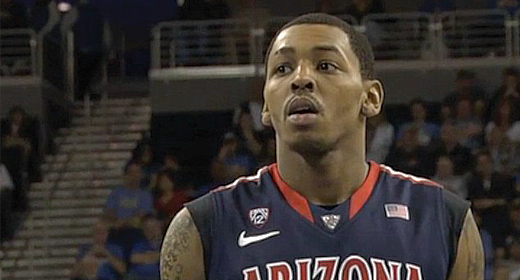 Being a graduate transfer, Mark Lyons had plenty of options to use his last year of eligibility. He chose to be the point guard for an Arizona Wildcats team who coming in had a strong senior and freshman class.

What has been evident above all as the season progressed was Sean Miller’s confidence and faith in Mark Lyons through the good times and the bad. The good like when Lyons lead the charge against Miami and also hitting the game winner against Florida. Or the bad when like him having 10 turnovers to one assist in two games against UCLA.

From one point guard to another, Miller and Lyons have remained confident in one another throughout and have developed a father-son type relationship that make Tournament runs so special.

“He’s one of the only males in my life that I can actually, you know, trust,” said Lyons. “I trust him regardless of the situation and will have a great relationship after basketball and things like that. He’s like a father figure to me.”

“Mark had a lot of great choices last spring,” added Miller. “He could have played with a lot of quality teams and he decided to rejoin us. And with that, we have a strong bond. We do. And I hope that is part of the strong bond that I hope can continue to let us play… I believe in that relationship in moments like this.”

Lyons had his experience and leadership shine through in round one against Belmont. Right out of the gates you could tell Lyons didn’t want this to be his last as a collegiate athlete. He lead all scorers with 23 and controlled the tempo of the game.

Point guard U is used to having their point guards be point guards. Lyons will tell you himself he isn’t necessarily a point guard even though that’s the spot he lines up at for his team.

“I am not a point guard, I am not a shooting guard. I am a playmaker,” explained Lyons. “Anything my teams needs me to do, I’ll do it. If they want me to guard the center I’ll do that. I just like winning. No one can question my winning ability. So that’s the only thing I really care about.”

One thing the team will definitely continue to need is his leadership for the duration of the Wildcats time in the NCAA tournament.