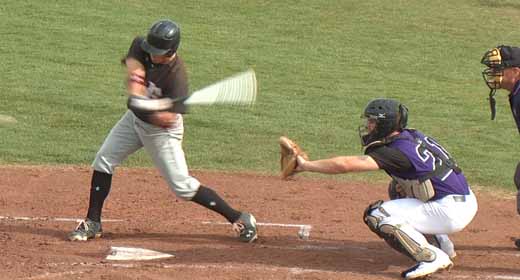 Baseball and Riley Unroe have been best friends since Unroe was a baby, and now their friendship is paying major dividends for Unroe.

“I was about two years old, watching my dad play professional baseball,” Unroe said. “Breaking my leg at three years old, I was still playing out in the field with my mom after games and going in the clubhouse [and] meeting the guys, I knew from a young age that this is what I wanted to do.”

Unroe is in his senior year at Desert Ridge. He plays shortstop, in the outfield and he’s a pitcher on occasion.

Little did he know when he was a youngster that he would be considered one of the best college prospects in the state, let alone the country.

Unroe is on just about every list a great young baseball player can be on, and to him, he attributes his success to the hours upon hours he’s put into perfecting his game.

“I put in the work for it,” Unroe said. “I’m not saying I deserve all that talk, but I definitely put in the work and I try and come and do my best everyday to help my team.”

Unroe’s father, Tim, played a total of five years in the major leagues for the Brewers, the Angels and the Braves.

Unroe says without his dad, he wouldn’t be the person he is today.

“He’s really motivated me and he’s taught me a lot about this game,” Unroe said. “I’m very lucky to have him [and] very grateful for him.”

Unroe has been through everything his son is currently going through, and he’s experienced things his son has yet to experience. So having that know how allows the elder Unroe to relate better to the younger Unroe.

“He’s [taught] me all the right things to do, where to be [at] what times, just to keep my head above water and be an influence and a bright star and lead a team instead of being a follower,” Unroe said.

As highly touted as Unroe is, he knows he hasn’t cracked the upper echelon quite yet. He’s young, so he’s got a lot more growing to do in the game of baseball.

“I would say get some more experience and really learn what it’s like to play pro baseball at the higher levels,” Unroe said.

There’s still another level Unroe has to complete, other than high school baseball, before he can get to the majors, and that’s college baseball.

Fortunately for Unroe, he’ll be a part of the most dominant baseball program in college sports: USC.

Unroe will be a part of a program that’s won 12 national championships.

The Trojans’ have been through some tumultuous times, with the recent firing of former head coach Frank Cruz for violating NCAA rules pertaining to the number of hours athletes can spend in activities directed by the coaching staff.

Unroe says he was looking forward to playing under Cruz. Nevertheless, Unroe was impressed by the coaching staff USC does have in place.

“The coaching staff and all the facilities and everything they have to offer was definitely the reason I chose that,” Unroe said.