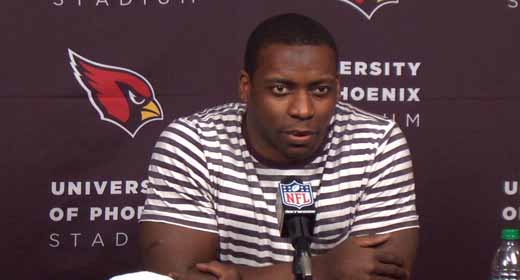 The Cardinals bolstered their running game on Wednesday with the addition of former Steelers running back Rashard Mendenhall.

According to reports, the team signed Mendenhall to a one-year deal, just a few days after releasing running back Beanie Wells.

Mendenhall has some history with head coach Bruce Arians from their days together in Pittsburgh. Arians served as Steelers offensive coordinator from 2007-2011. Mendenhall was drafted No. 23 overall by Pittsburgh in the 2008 NFL Draft out of Illinois.

Mendenhall has a grasp on how Arians likes things to run, which should make his transition into the offense that much easier.

Despite fighting various injuries (shoulder, ACL), Mendenhall was very productive during his time in Pittsburgh. From 2009-2011, Mendenhall rushed for 3,309 yards and 29 touchdowns. He had a career high 1,273 yards and 13 touchdowns in 2010.

Mendenhall should have quite a battle on his hands for carries with Ryan Williams eager for that No. 1 spot as well. Williams has been dealing with knee issues ever since he came into the league, and, providing he’s over those issues, he’ll be out to prove to all that he deserves to be a No. 1 back in the Cardinals offense.

It seems like a low-risk, high-reward deal for both Mendenhall and the Cardinals, being that it’s just a one-year deal.

The Cardinals really have nothing to lose if Mendenhall doesn’t pan out, and if he does perform beyond their expectations, then they can go back to the drawing board and negotiate another deal.

If Mendenhall can revert to his 2009-2011 form for Arizona, then things are surely looking up for the Cardinals from an offensive standpoint.