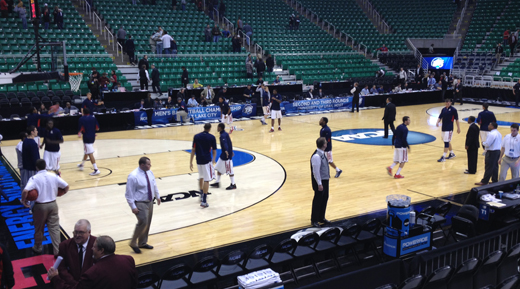 It was the trendiest upset pick around the nation. The sixth seeded Arizona Wildcats and their struggles guarding the three-point shot and the 11th seeded Belmont Bruins being one of the top shooting teams in the nation.

Well Arizona busted brackets on Thursday night in Salt Lake City as they eliminated Belmont by the final score of 81-64.

“Our players locked in on what we were trying to do, played great defense, especially in the first half,” said Arizona head coach Sean Miller after the game. “As the game wore on we really got the ball inside, and as we got the ball inside a lot of good things followed.”

The Wildcats came out fast and hit the Bruins in the mouth early. They jumped out to a 14-4 lead which saw Belmont shoot just one for their first eleven from the floor. However, shooting was not the difference in this game. It was the Wildcats domination over the Bruins on the boards that was they story. Arizona finished the game out-rebounding the Bruins 44 to 18.

“That was a big factor going into the game.” explained Mark Lyons. “Coach made it a big issue for us to get the ball inside. Our size advantage was significant. That’s why our rebounding advantage was large today. Brandon (Ashley), Kaleb (Tarczewski) and Grant (Jarrett) did a great job rebounding and Solomon (Hill) too.”

Mark Lyons was on top of his game leading all scorers with 23 points. Kevin Parrom, Nick Johnson and Kaleb Tarczewski each chipped in with 12 points leading the offensive charge getting the Wildcats over 80 points for the first time since January. Overall, Arizona shot a blistering 57% from the field and 67% in the second half.

It was Arizona’s defense that had received the most scrutiny over the last month or so. They admitted it themselves. On Thursday they held Belmont to 39% shooting, 30% from three and did an excellent job closing out defenders behind the ark the entire game.

The Wildcats move on to face Harvard, who upset New Mexico, on Saturday from Energy Solutions Arena in Salt Lake City, Utah on Saturday.