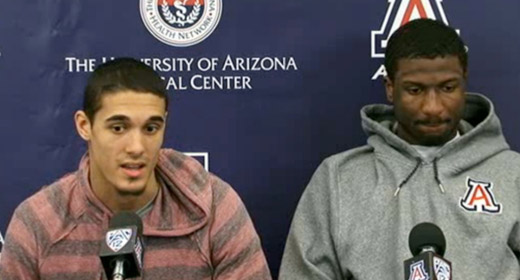 It was the shot that didn’t count that swept the College basketball landscape back on January 3rd. After blowing a 17 point second half lead and missing five of their last eight free throws down the stretch, Sabatino Chen had the ball in his hands with the game tied. He launched a three which banked in and looked to be the game winner.

However shot was waved off which looked like it was a fraction of a fraction out of his hands before the time expired. Arizona went on to outscore the Buffs 12-3 in OT in route to their 13th win of the season.

Thursday brings Colorado’s first opportunity to get rematch Arizona. And the Wildcats are expecting the Buffalos as well as their crowd to be amped up for it.

“No one wants to lose in that way or in overtime,” said Nick Johnson. “At the end of the day it’s just a game. So we are going to prepare for it just like we would prepare for any game. We can’t really control what they do.”

Following the loss to Arizona, Colorado went into somewhat of a tailspin losing three of their next four games. But the Buffs have gotten control of the ship and have caught fire of late, most recently sweeping the Oregon schools on the road.

“Looking at their schedule too, five out of their last seven games are at home,” explained Sean Miller. “They have always been a very good home team. And I think from a confidence perspective, if you win four of your last five and coming off of a road sweep and you have five of your remaining seven games at home in front of that crowd where they have been very successful, I am sure they are a very confident team.”

“From my experience last year I know that they are excited to have us there and definitely from what happened last game,” added Johnson. “They are going to have a great crowd and we are just looking forward to going out on the road.”

The Wildcats themselves are coming off of their second home loss of the season and their third overall against Cal last Sunday. Getting out to fast starts has been an issue for them almost the entire season. In the last six games, from the start of the game until the first media timeout (which is about the first four minutes), Arizona has been outscored 50-39 and have trailed at that point in four of those six games.

It’s not question the Wildcats have shown they can bounce back after slow starts as they still went on to win four of those six and have had great comebacks like the one against Florida. But in a game that most would think Colorado has had circled on their schedule since January 3rd, Arizona knows they will need to come out fast.

“Guys have to know that we have to take that head on,” mentioned Hill. “We have to be ready for a crowd like at Colorado, a sold out crowd and if those guys come out extra hard, we have to match their intensity.”

The Buffs Valentines Day rematch with the Cats tips at 8pm from the Coors Events Center in Boulder, Colorado.