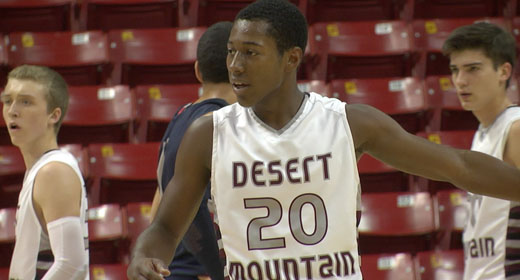 The Desert Mountain Wolves basketball team has been a force this season with their 21-3 record and all around consistent play.

Leading the way for the Wolves this season is junior guard Rolando Rhymes and his 15.6 points and 4.7 assists per game. He was forced to sit out last season because of transferring from St. Mary’s after his freshman season. Since he was limited to just practicing with the team, Rhymes had the opportunity to learn a lot about himself as a player.

“Probably my basketball IQ,” said Rhymes. “Learning who’s going to be where, where to penetrate and kick too and working on my body. Working on my inside jumper.”

The year off also helped Rhymes become acquainted with his teammates. Rhymes great ability to beat defenders off the dribble and get into the paint is among the best in Arizona. Once in the paint, he is a threat to score. But he also knows his teammates strengths and where they are on the floor at all times.

“It helps us a lot because they are all a group of shooters,” explained Rhymes. “So when I penetrate, the teams will have to collapse and I kick it out, it’s an easy three for them.”

“Chris Paul,” Rhymes stated without any hesitation. “I feel he is the top guard in the NBA. I love his game.”

The year off allowed Rhymes to get to where he is today, but he wants to continue to improve. As a junior, he has plenty of time to do so to try and prepare himself to have the opportunity to play at the next level.

“The biggest thing I am working on is knowing when to take over a game, when to slow it up, when to push,” mentioned Rhymes. “Just my IQ, maturing. I’d say that’s the biggest thing.”

It’s almost playoff time in the valley and the Desert Mountain Wolves will be among the favorites for the division I state title. The Wolves last won the state title back in 2007 and Rhymes is looking to lead the way to bring them back to the promised land.

“Our defense can always get better,” Rhymes said. “Our chemistry is there. When we are knocking down shots we are a tough team to beat. We just have to go out there and execute what coaches say.”