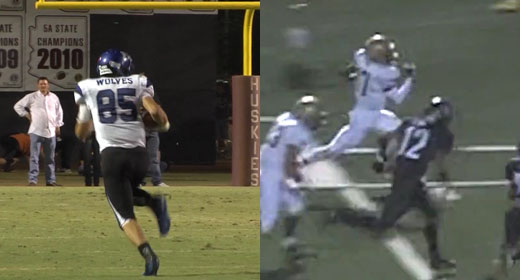 NAU head football coach Jerome Souers and his staff have done a fantastic job of keeping Arizona talent within the state and adding them to his program.

The Lumberjacks landed two more local talents – WR/DB Maurice White from Notre Dame Prep and TE Patrick Baldenegro from Chandler High School – both of whom are sure to come in next season and make an impact in Flagstaff, Ariz.

Of course the move to Division I football and playing in the Big Sky Conference has both young men ready to get it started.

They’re well aware that they’re going to have to jump in feet first and show and prove, being that they’re the new kids on the block.

“I’m ready, because that means I’m gonna be fighting and competing for a No. 1 spot on the depth chart, so hopefully I can get there,” White said.

“I’m excited to get up there and make a dent,” Baldenegro said. “I’ve been looking forward to making a name for myself besides the one I’ve started here [at Chandler].”

White says the main reason he chose NAU was because he could stay in state and his mother and the rest of his family could come and see him play.

White loves the fact that Coach Souers saw enough in him to make him one of his prized selections.

“That just shows me and everyone in the state of Arizona that Arizona football is a lot better than what people think, it’s really underrated,” White said. “It’s a good feeling knowing Coach Souers thinks I’m one of the best players in Arizona.”

White says he fielded offers from three other schools besides NAU, and the Lumberjacks weren’t even No. 1 for him until his mother stepped in.

I mentioned White is a hybrid offense/defensive player. He says he wouldn’t mind playing on both sides of the ball, but he prefers to play defensive back because he loves making plays on that side of the ball and getting interceptions.

“They only have four [defensive backs] this year, so I have a good chance of maybe fighting for a starting position next year,” White said.

White sat down with Lumberjacks defensive coordinator Andy Thompson, who laid it out simple and plain for him on how they play defense in Flagstaff, Ariz.

“He said when you get out on the defensive field, you’re gonna have to fight,” White said. “That’s our No. 1 rule, you fight, you battle and I’m ready for it.”

White already has some lofty goals in mind for his first season, and with good reason. He’s heading to a program that was 8-3 last season. One that’s looking to go beyond that in 2013.

“They have big expectations for next year, probably being a Big Sky contender for the championship,” White said. “I’m looking forward to winning games and getting back on the winning column and possibly making [the] playoffs next year.”

When I suggested the fact that he could possibly thrive in NAU’s offense, Baldenegro had the biggest smile on his face, because he knew what I was saying was true.

Baldenegro, like White, had multiple offers as well, but his path to his decision was a little different than his counterpart’s. He knew all along that NAU was his top choice.

“As soon as NAU offered, they jumped up to the top of the list,” Baldenegro said. “No disrespect to the other schools, but NAU is close to home [and] it’s some good football up there.”

“I feel really honored, really blessed,” Baldenegro said. “Those are some highly accredited guys up there and I just can’t express how lucky I am that they chose to recruit me.”

Baldenegro mentioned the fact that he’s a little underweight at tight end. Right now he clocks in at 212 pounds, which isn’t a bad thing necessarily, because the Lumberjacks figure they can use that to their advantage on offense.

“They’ve talked to me about, with my speed threat, stretching the field,” Baldenegro said. “They said they can use me on the line, but also have the option of going out, catching the ball, showing a little bit of my moves off in space.”

Just talking with these two young men, from the get-go, I was extremely impressed with how they conducted themselves during the interview and how respectful they were.

These are two quality young men that will do great things for NAU this coming season and for seasons to come.