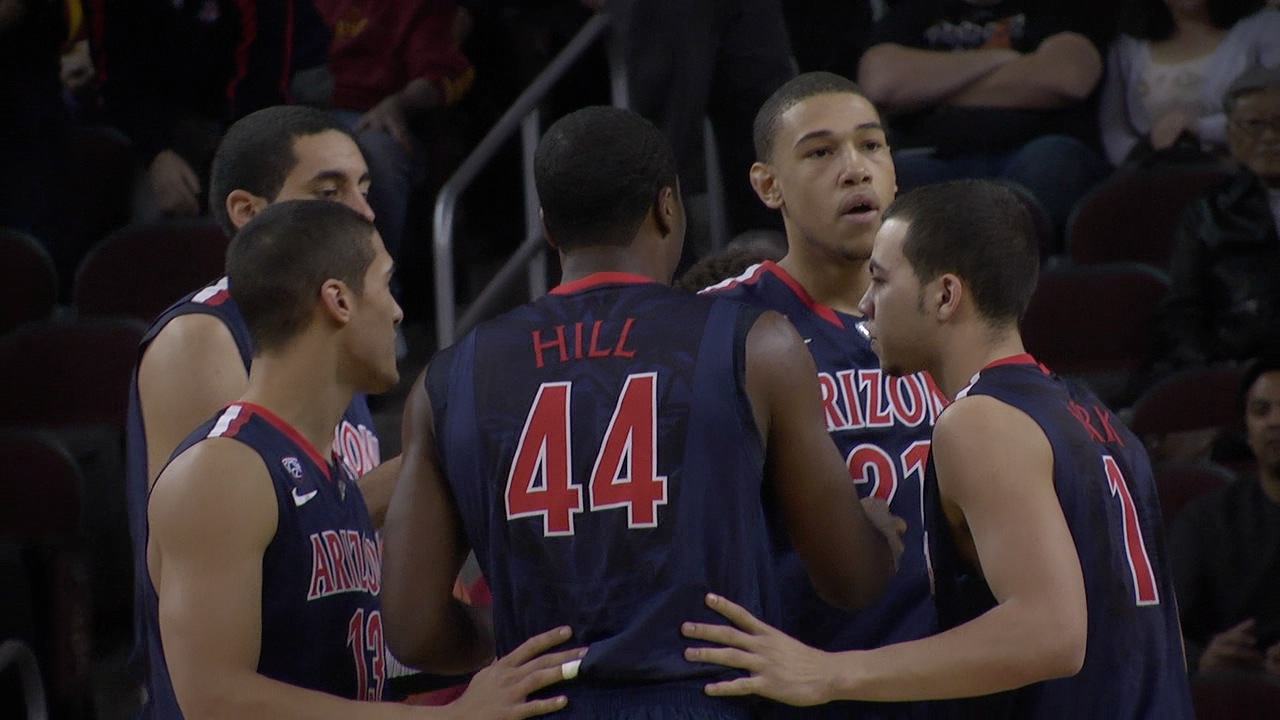 The Arizona Wildcats put themselves in a tough position as a result of Wednesday night’s loss to the USC Trojans. The loss takes them out of a tie for first place and now have to rely losses from Oregon and UCLA to help get them back on top.

It’s never a comforting feeling to have the Pac-12 crown fait in someone else’s hands but it is the reality of the situation.

“It’s a horrible feeling,” stated senior forward Kevin Parrom after Arizona’s loss to USC Wednesday. “We have to depend on somebody else to beat somebody so instead of just taking care of business here, we let it slip away tonight as a team.”

“I can’t really speak for ourselves on being an elite team,” mentioned Solomon Hill. “We are not in a position that we can win the Pac-12 championship if we lose these two. We are not in that position since we lost this one (loss to USC)…I think our first 12 games we were an elite team but we’ve lost our way.”

Sean Miller see’s it like Hill that this team has seemed to lost their way. He mentioned after the loss to the Trojans that the recent stretch this team is on is “the worst defense of any team I have coached.” So with with control out of their hands to win the conference, where does Miller and the Wildcats focus?

“When you do what we just did, it’s not about winning the conference, it’s about winning a game,” mentioned Miller after Wednesday night’s loss. “We are faced with an immense challenge on Saturday and if we don’t play harder on defense and better on defense, I don’t think the game will be close.”

The last time Arizona played UCLA, the game wasn’t exactly close either. UCLA raced out to a 21-5 lead in the first eight minutes of the game and for the most part, never looked back. What the Wildcats can control is they can themselves hand the Bruins, who going into Saturday are a half game ahead of them, a loss. Arizona needs to rely on other teams to do their dirty work for them to get ahead of Oregon.

Miller explained that from what transpired in the second half of the Washington State game last Saturday, he is worried the team will struggle to flip the switch back on. A switch that seemed to be on in the Wildcats in their win over Washington last Thursday. He elaborated saying his team is not talented enough to flip the switch on and off whenever they please when it comes to effort, especially on defense.

The Arizona head coach does know what it will take for his team to try and get back to what was working at the start of the season.

“Toughness isn’t punching someone or elbowing someone,” he said. “Toughness is being able to perform under game pressure. When the chips are really down early March, late February, to be able to compete hard. That’s when you are a tough player…We’ve lost what we once had and when you see that on a given night, you can lose a basketball game. Especially in our conference.”

Pros2preps.com will be at Pauley Pavilion for the Wildcats rematch with the Bruins to try to get back some control of the Pac-12 crown. Tip at 7pm from Westwood, California.