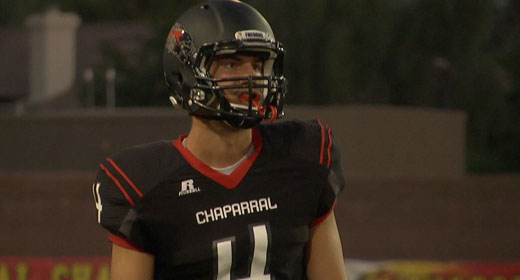 In three years on varsity for the Chaparral Firebirds, Jake Roh accumulated 122 catches, 1,947 receiving yards and 34 total touchdowns while being a part of two state championship teams.

Roh had quite the list of college football programs interested in his abilities and at the end of the day, it was Boise State that ended up being the one that made the most sense for him.

“Most importantly I just fell in love with it (Boise State),” said Roh. “If I would have chose anywhere else I would have been second guessing myself and I didn’t want to do that.”

As a high school player, Roh flourished on the defensive side of the ball as well. Playing outside linebacker for the Firebirds during his senior year he had 72 tackles with four sacks and four interceptions. College’s began to look into Roh as a defensive player.

However, Boise State came along and recruited him more-so on offense and found that he would be the great match for their offensive scheme.

“I felt like their offense fit perfect to my abilities as a you know kind of being a bigger receiver moving into the h-back, tight end spot that they have,” Roh explained. “It’s almost like it was made for me.”

The Roh family isn’t new to the college football landscape. Jake’s older brother Craig is a starting defensive end for the Michigan Wolverines. So Jake himself has learned and knows what it takes to carry on his high school success to the college level.

“You’ve got to work hard,” Roh said without hesitation. “That’s probably the biggest thing for me is just don’t let up for a second because you know everyone who’s out there is just as good as you. They all did the same things you did in high school so you know it’s tough competition and you just have to work your butt of.”

Roh has become friends with Paradise Valley quarterback and fellow memeber of the Boise State 2013 recruiting class, Ryan Finley. The two plan work out together this spring in the valley before heading to Idaho this summer.

One of the biggest adjustments above all that Roh will have to make when he heads up to Boise is of course the famous blue turf.

“I think it will take some getting used too,” Roh joked. “But it will be fun to play on it.”