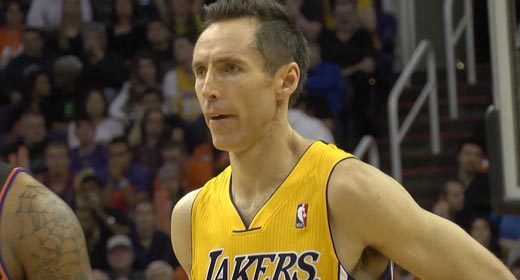 Ten seasons, two MVP’s, two western conference finals appearances and the most assists all-time in Suns history. Steve Nash will go down as one of the best players ever to put on a Phoenix Suns uniform.

On Wednesday, Nash returned to Phoenix for the first time since being traded to the LA Lakers last offseason. He received two great ovations from the Phoenix crowd and received a thank you video on the jumbotron during a time out in the first quarter.

But the Suns themselves put a damper on Nash’s homecoming, knocking off the Lakers 92-86 behind a season high 27 points off the bench from Michael Beasley.

Despite the loss, Nash was excited to return to Phoenix.

“It’s exciting,” said Nash. “Really because this place is so special to me. The last eight years and the two years earlier with the city, the fans. It’s a special, special place.”

Last off-season, Nash made it known that he would like to finish his career as a Sun and would do whatever it took to try and make it work. But Nash and the Suns ultimately decided to part ways.

“I thought that was the way it was going to go” explained Nash. “I thought I would retire in Phoenix but it’s a difficult business to make any sort of predictions like that.”

“It just became apparent in the last couple months before free agency that that wouldn’t be a home run and that’s when other options started to become a reality.”

Nash technically has only been apart from the Suns organization for a little over six months. But since his departure, Phoenix has taken on a completely different look. Nine new players, a new head coach and coaching staff and even a new court at US Airways Center. But Nash said on Wednesday that there were still plenty of familiar faces he was glad to see.

“Security guards, ball boys, season ticket holders. There are a lot of familiar faces here regardless of the coaches and players who have departed,” mentioned Nash. “In that respect it does feel like coming home and I am happy as much to kind of see all of those people again and tell them thanks.”

Nash and the Lakers have been battling a tumultuous season trying to get back into the playoff picture and live up to high expectations. The Suns did their part in trying to prevent the Lakers from making the post-season, giving the Suns the opportunity to get two lottery picks in the 2013 draft.

The Suns received the Lakers 2013 first round pick as part of the Steve Nash trade.