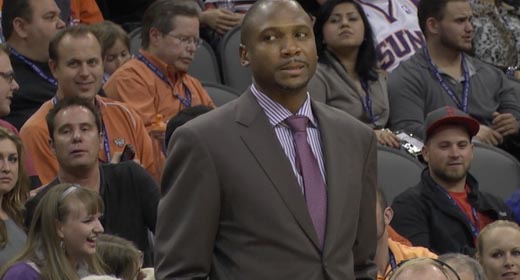 Two games down and two wins down for Lindsey Hunter as the interim head coach of the Phoenix Suns. It is a new experience for Hunter and he is being thrown into the fire halfway through the NBA season.

With new experiences comes new responsibilities and a different demeanor. The demeanor of being the head man of a professional team is something Hunter has quickly noticed is a big adjustment.

“There is a different dynamic to the relationship,” explained Hunter on Thursday. “But like I’ve always said, I want respect, I’ll get respect, and hopefully we will get to a point to where we are growing together.”

“Not run out on the court and try to stop them myself,” added Hunter when asked what the most difficult adjustment has been. “Because as a coach now you can’t control anything that goes on out there. So there are times where you are like, ok just relax. And keep yourself in your skin.”

A lot has been mentioned since Hunter took over has been the departure of former assistants under Alvin Gentry, Elston Turner and Dan Majerle. Despite that, Hunter is relying plenty on the assistants who remain with the team and their experience to help guide this team the rest of the season.

“My assistants have been off the charts. They have been phenomenal for me,” said Hunter. “I have given those guys free reign. I am like, I don’t know everything. I am not going to pretend like I do.”

“I am new at this. You guys know it. Igor (Kokoskov) was rebounding for me back when I was in Detroit years ago,” explained Hunter. “I give those guys free reign to do and say whatever they feel.”

Hunter made a name for himself as a player and has remained a part of the game developing NBA talent. Head coaching is a different animal. While Hunter has more responsibility, has to dictate to his team in a different fashion and has to spend more time in front of the media (which he noted was the biggest surprise thus far), he doesn’t plan to change who he is as a person.

“I try to always be me,” said Hunter. “How I’ve been, how I’m made, I try to be true to it. My Dad always told me hey, be yourself. And that’s what I’ve always been. Try to be myself.”