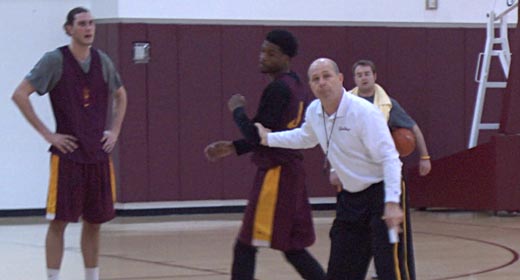 The Sun Devils have had a great amount of success recently against Arizona at Wells Fargo Arena. They’ve won three of the past five meetings with the Wildcats, including the regular season finale last season.

They’ll be looking to continue that winning trend on Saturday, as the No. 7 Wildcats come to Tempe, Ariz., for a huge afternoon match-up.

Both teams come into this game off a recent road split in the state of Oregon – both teams beat Oregon State and lost to Oregon.

The Wildcats aren’t the No. 7 team in the country by accident: they play great defense, they rebound the ball well and they don’t beat themselves with silly fouls.

Head coach Herb Sendek talks about the Wildcats size and how versatile they can be with that size.

Before coming to Tucson, Ariz., Mark Lyons attended Xavier University, where in his junior season, he was instrumental in the Musketeers 23 wins and their NCAA tournament berth.

Lyons leads the Wildcats in scoring in this his senior season. He’ll no doubt be a handful for the Sun Devils on Saturday.

Sendek has nothing but respect for Lyons and what he brings to the court.

“He’s a really dynamic player,” Sendek said. “He has experience and he has talent, which is a great combination.”

The Sun Devils defense will have to play their best game on Saturday if they expect to knock off the Wildcats, who have so many weapons other than Lyons.

Arizona State will have to contend with Solomon Hill, who almost never leaves the court, and averages almost 14 points per game.

They’ll also have to contend with Gilbert, Ariz., native Nick Johnson, who knows how to steal the ball.

Forward Carrick Felix says he’s ready to take on Hill and try to shut him down.

“It’ll definitely be a good match-up, we’re both big wings, and we’re both aggressive players and we kind of have a similar game,” Felix said. “I have a tremendous opportunity ahead of me this Saturday.”

Felix mentioned the word “aggressive.” Anyone who’s watched Felix on the defensive end of the court can tell his play there has increased a hundred fold as time has went on.

Felix says there is a such thing as being overly aggressive on defense, something he’s going to effort to not do against Hill and the Wildcats on Saturday.

“When you’re overly aggressive, you tend to make little mistakes, make stupid fouls [and] put your team in a position to lose a possession or two just because you’re gambling,” Felix said.

Felix knows he’ll have to play smart defensively against Hill, which is why he’ll be watching extra film on him this week to learn Hill’s tendencies, so he can “think before he’s thinking.”

This will be Jahii Carson’s first game, first ASU/U of A experience, and he’s hyped for it.

“I’m excited, chomping at the bit,” Carson said. “That’s one of the games you look forward to as a kid growing up, wanting to play college basketball, is the rival.”

The players who have participated in this rivalry broke it down to Carson on just how things are when the Sun Devils and Wildcats get together.

“They said the tensions are high just in general,” Carson said. “They wake up in the morning, they know they gotta come out here and play like they never played before because it’s a hometown thing.”

Carson said his cousin just graduated from Arizona, and his mother is an Arizona State alum, so you know the conversations in the Carson family are animated when it’s time for the rivalry games.

“She’s U of A all day, and she loves that they’re No. 7 in the country,” Carson said. “She loves that we’re coming up in the rankings too, and having a nice little buzz.”

“Everybody’s just excited in my family for the most part since we’re hometown people.”

What does Carson need to do on Saturday to not get caught up in the atmosphere, and keep his mind on the task at hand, which is beating the Wildcats?