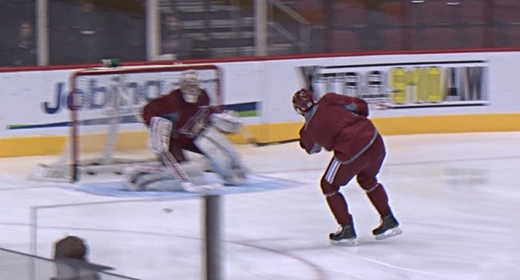 The Coyotes have their training camp roster set and they know who they’ll play this season. All that’s left for them is to get to Dallas, drop the puck on Saturday night and get the season started.

The Coyotes’ schedule is tight as expected, with some crazy twists in it.

Phoenix starts with the Stars this coming Saturday. They’ll come home and host the Chicago Blackhawks in their home opener the very next night.

Phoenix has seven games in its first 12 days. In early March, they’ll play the Anaheim Ducks three consecutive times in five days. In mid-March, they have a four-game road trip that sees them take on their most hated rival, the Los Angeles Kings twice at Staples Center on consecutive nights.

As the season winds itself down, Phoenix has six games out of seven on the road, including a murderous trip to St. Louis, Chicago and Detroit.

Did I mention how crazy this schedule is?

With all that being said, having a fast, strong start to the season will be crucial to the Coyotes success.

As head coach Dave Tippett said the other day, during this shortened training camp, the team will basically re-hash a lot of what they already know works for them. They’ll also throw a few new wrinkles into their overall game plan.

“I look at it as, you gotta have a great start, a great middle and great finish,” Tippett said. “That’s one of the identities of our team is how well we can play for long stretches of time, and consistency is a big part of it.”

With such a condensed schedule, it’s also important for Tippett and his coaching staff to manage players’ time on the ice, to avoid burning out players and/or possibly risking unnecessary injuries along the way.

Tippett reflected back to last year’s playoffs, and how they had to manage playing time for everyone. He said they’re going to follow suit with that form of time management this season.

“We wanna make sure that our players for every game has as much energy as possible, and give us the best chance to win,” Tippett said.

Tippett says they will use video technology to aid with the monitoring of time, as well as their standard meetings and ice time.

“We’re gonna get creative with that aspect of it and make sure our players are ready,” Tippett said.

Left winger Steve Sullivan is one of the newest Coyotes, coming to the team from the Pittsburgh Penguins. Sullivan is expected to replace Ray Whitney, who signed with the Stars.

Sullivan has six 60+ point seasons in his career, so he comes in with some firepower under his belt.

Sullivan says he liked the Coyotes “style of play,” and that’s what attracted him to the organization the most.

Anyone who follows the Coyotes knows that their style of play is to play close, tight games every night. Sullivan is aware that this way of playing hockey is how it will be on most nights this season, especially when every game will be against division and conference opponents.

“Trying to scrape some points every single night, that’s going to be the key to try and get into the playoffs,” Sullivan said. “If you can do that, then you’ll be in the Top 8, and you saw last year what happens if you sneak in, anything can happen.”

Speaking of last year, goalie Mike Smith was the unquestioned MVP for the Coyotes. Smith had 38 wins, eight shutouts and a GAA of 2.21.

Smith is very confident that the guys in front of him – both forwards and defensemen – will deliver this year, and everyone will work in tandem to get the job done, which is to win games.

“We pride ourselves on playing as a team, playing as a group,” Smith said. “We have that chemistry already, you feel it in this locker room.”

Smith said his teammates are used to the way he plays his position and how he plays the puck. To him, that will be a major plus for the team coming into this season.

“They know where to go on the ice now, there’s no excuses in that sense,” Smith said.

Coyotes captain Shane Doan sees some exciting times coming to Glendale, Ariz., with the return of Coyotes hockey, the future raising of the division championship banner and the eventual settling of team ownership.

On the flipside of all that, Doan knows that the team has a lot of work to do in order to win back fans who may have turned a blind eye to the team and on the sport of hockey as a whole.

“As a league, you have to deal with, you have to understand what you’ve put them through and you owe them an apology,” Doan said. “We gotta recognize that we entertain people [and] we gotta find a way to do that.”