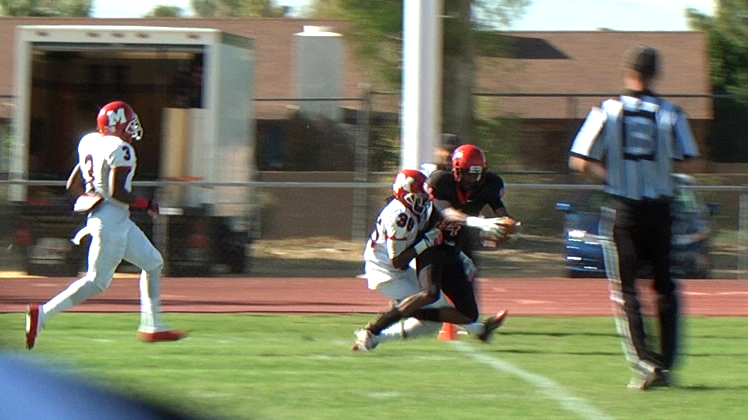 Aside from being a bowl game, this one had added significance, especially for the Gauchos. Three weeks ago they lost to the Firebirds 38-24 in the season finale for both teams.

They were looking for revenge after that loss, and they got it on Saturday afternoon.

Sophomore quarterback Dain McFarland threw three touchdown passes to lead the Gauchos over the Firebirds 41-35 in a tightly contested game.

The game had so many ebbs and flows, and came down to a final fourth down play late in the fourth that Mesa C.C. couldn’t convert, which allowed Glendale C.C to kneel down and claim the victory.

For Glendale, it’s their third Valley of the Sun Bowl win in four seasons.

“We knew it was going to be a tough game,” Gauchos head coach Mickey Bell said. “They’re [Mesa C.C.] a talented team, [they’re] coached well and we knew it’d be a good game.”

The Thunderbirds weren’t even originally slated to play in this game. Glendale’s original opponent, Central Lakes College [Minn.], had to back out because of a late season forfeiture of games.

That event allowed Mesa C.C. to step in and provide great competition for the home-standing Gauchos.

Mesa C.C. would take a 21-10 lead in the first half after an electrifying punt return for touchdown by defensive back Damarious Randall.

Glendale answered right back before the half with two touchdowns of their own to make it 24-21.

They’d expand their lead to 38-21 in the third quarter, as McFarland would hook up with wide receiver Jesse Tate on their second touchdown of the game.

Freshman quarterback Jon Brown would break off a long run of his own to give Glendale C.C. the 17-point advantage. However, Mesa C.C. wasn’t quite ready to wave the white flag of surrender, putting up 14 points of their own to make it 38-35.

Sophomore quarterback Jaymason Lee found Randall on a touchdown pass play, while their other quarterback, Blake Kemp drove the team down for the other touchdown, as he and wide receiver Tristan McClelland found each other on the second score.

Freshman kicker Michael Navarro would make the hit from 33 yards out to give the game it’s final score.

McFarland was voted Most Valuable Player for Glendale. He gave credit to his teammates for the honor.

“It feels great,” McFarland said. “I couldn’t have done it without my coaches, offensive line, receivers, everybody.”

“Coach [Bell] always taught us to come out and play four quarters, so we tried to do that today,” Tate said. “We knew they were going to be a good team and give us a battle, so we came out here and fought hard, and it’s good to get this win.”