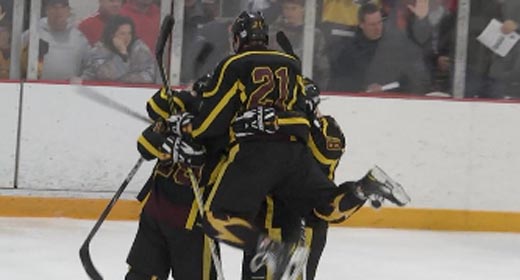 While NHL arenas remain dark and millionaire owners and players squabble about what is fair and just, there is still hockey in the Valley and these guys lace up the skates just for the love of hockey.

While the Arizona Cardinals have lost 9 straight, the Phoenix Suns wallow below .500 and the Arizona Diamondbacks finish below .500, there is an Arizona team that is currently the #1 ranked team in the nation and has a 20-2 record, the ASU Sun Devil Hockey Club.

The Devils notched 18 victories in a row until they met NCAA Division I Penn State on November 30. That night the Nittany Lions handed ASU its first loss 8-3. The Sun Devil team bounced back to avenge the previous night’s loss on December 1 winning 3-1. The next time the Devils took the ice, hosting Robert Morris of Chicago, it was just the opposite. ASU won the first match 7-4 and lost the next night 5-3.

The Sun Devils, who play at Oceanside  Arena in Tempe, are making a name for  themselves and are no longer thought of as just another club team but are considered a real threat. Led by Kale Dolinski, who has scored 23 goals and tallied 14 assists in just 21 games, Stephen Collins, 20 goals and 9 assists, Colin Hekle, 17 goals, 19 assists and 45 penalty minutes,  Danny McAuliffe, team leading 21 assists, 11 goals and Brian McGinty, 11 goals and 18 assists. ASU plays with one of the nations’ most balanced lineups. The Devils’ club has 11 players with at least 14 points. That means every night a different player has the ability to make ASU opponents pay. When you look at the combination of statistics and overall record it is evident that ASU Coach, Greg Powers, has his team poised and disciplined.

Sun Devil hockey prepares for their next opponents, University of British Columbia and Simon Fraser in Burnaby, B.C December 28 and 29 before returning home to face Minot State and Williston January 3 and 4.  All games start at 8:00 p.m. and tickets are just $7.00 for ASU students, $10.00 for adults and $5.00 for children 5-15.  For more information about ASU Sun Devil Hockey  visit SunDevilHockey.com.